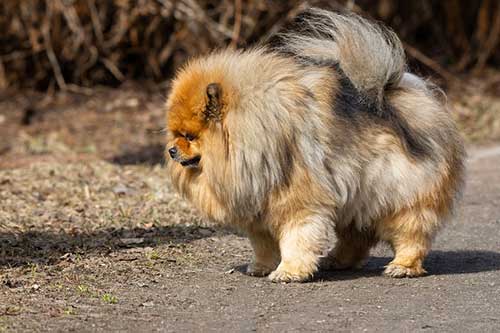 At first sight, Chow Chows look like giant teddy bears. They are big and fluffy, with squishy faces and almost comically blue tongues, not exactly a description you would usually associate with aggression. Yet this breed of dog has a reputation for being a bit rotten. Have they earned it? Or are they just misunderstood?

Chow Chows are an ancient breed, possibly even the most ancient of all dog breeds. The earliest records of them are from the Han Dynasty in China, around 206 B.C., although many experts believe they are much older.

They have quite a varied portfolio, having been used for everything from hunting to herding, guarding to hauling, even for meat during rough times. They are most famous for being used as royal companions, largely due to their lion-like appearance and dignified demeanour.

They have thick, double-layered coats, which can be rough or smooth in texture, and a lion-like mane around their neck and shoulders. They can be a range of colors, including red, cream, cinnamon, black and blue, and have a very distinctive blue/black tongue.

As far as dogs go, Chow Chows are arguably the least dog-like in temperament. They have actually been likened to cats by many owners! They are unusually independent and reserved, and not particularly cuddly. If a goofy, playful cuddle-bucket is what you want in a dog, this really may not be your guy!

They tend to be very protective of their family and will bond with them very closely. Around people they care about, Chows are affectionate, faithful and loving, like any other dog. Around strangers though, they are often described as aloof, dominant and stubborn, and have a tendency to be territorial.

This isn’t to say that they can’t be affectionate or playful though. It’s just not first on their list of priorities, and they certainly won’t show their softer side to just anybody!

Are they sociable? Well, that depends who you are to them. They are certainly picky. Chow Chows are fiercely loyal, and will bond closely to their family. However, they are typically indifferent (at best!) with strangers.

For a Chow Chow, there is a big difference between people they consider family or friends, and people they don’t. This is why it’s so important to socialise them well from an early age.

Teach them from the get-go that other people or animals are not enemies, but just friends they haven’t met (might take a little convincing…think of it like trying to persuade your grouchy, introvert friend to go to a party you know they’ll enjoy when they get there!). Let them associate interactions with strangers with good things, like games, treats, and praise, and they should get over their more aloof side.

So, are they aggressive?

The difficulty with Chows is that they are naturally dominant and strong-willed dogs, who are independent, territorial and protective. This combination of traits means that, in the wrong hands and without proper socialisation and training, you might wind up with a dog with some aggressive tendencies.

They don’t like being told what to do. They prefer to do their own thing and make their own rules and decisions about the world around them. Unlike many other breeds, their first instinct when faced with a stranger isn’t to go bounding up and say “HI!” to their new friend. They are more likely to be wary, or even challenging.

This is probably where their reputation for aggression comes from. But it isn’t because Chow Chows are inherently aggressive. It’s because the wrong type of owner accidentally raised them in a way which brought out their dominant, territorial side. The wrong upbringing can create a perfect storm for some of their traits to evolve in an unhealthy way.

This is why, as with any strong-willed breed, proper socialisation and strong leadership are so important. Chow Chows mostly assume they are the leaders of any pack. Your job as an owner is to convince them otherwise.

Now, this doesn’t mean you need to get tough and mean and show them how strong you are. On the contrary, a true leader is one who stays calm and patient, but firm and consistent.

How can you train your Chow Chow to be “nice”?

The best way to train your Chow Chow is through positive reinforcement, and by creating firm boundaries and limitations. Your attitude and behaviour is so important for this to work. While it is essential for you to be firm and show strong leadership, you need to stay calm and empathetic towards your pup.

Aggressive or harsh training techniques are not appropriate with any dog, but with Chow Chows they can actually be counterproductive, even dangerous. These guys do NOT like to be pushed around, and with a dog this powerful, you want to hope they don’t decide to push back!

It’s a tricky balance to achieve, and may not be for everybody! But earning both your dog’s trust and his respect is not only incredibly rewarding, it’s also essential for raising a well-balanced dog.

Because Chow Chows are naturally protective, as I mentioned before, they have a tendency to be very wary of strangers. To mitigate this kind of behaviour, show them you are in control of the situation.

If your dog trusts that you really are their leader, that you’re in control of every situation, that it’s your job to decide whether or not a stranger is a threat and not theirs, they will be much more comfortable around new people. It’s a win-win: your dog will feel calmer and more secure, and you won’t have to worry about him being rude to your friends!

All dogs have the capacity for aggression. Chows are no different. They may have a tendency to be independent, stubborn, dominant, territorial and protective, but they are not naturally aggressive.

Their reputation for aggression likely comes from improper handling and training. In the right hands, Chow Chows can be as loving and friendly as just about any other dog (or cat perhaps!).

Along with their tough side, Chow Chows are also just as capable of showing their soft side. They naturally form a very close and loving bond with their immediate family. They are natural guardians. They are loyal, dependable and affectionate. They can even learn to be this way around other people and animals.

They need to be raised in an environment which fosters their softer side, and teaches them how to control their tougher traits, and put them to good use. In a well-balanced dog, these “problematic” traits can be controlled, or even become strengths:

In the right hands, a Chow Chow makes a remarkable companion and protector. They just take a little extra effort to warm up to people! But for those willing to put in the time, the reward is well worth it.