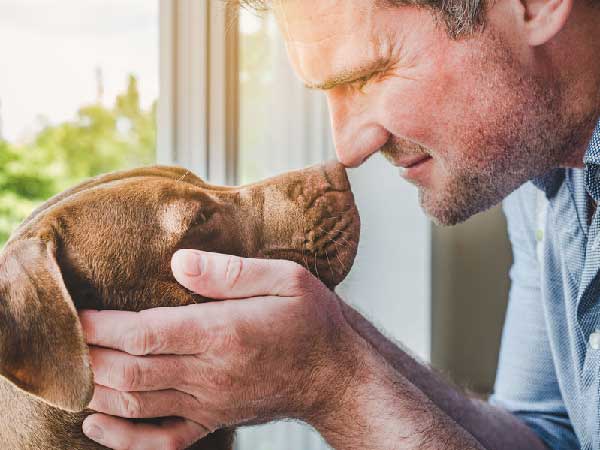 For you, it is very common to caress or touch certain areas of the body of your furry friend and observe their involuntary reactions to it. The typical case is when dogs move their legs quickly because you stroke their back or belly.

That is a natural involuntary reaction known as a “scratch reflex.” Usually, this reflex appears when you scratch or pet a dog behind its ears, on its back and mainly on its belly. That happens because these regions of the canine’s body are particularly sensitive thanks to the fact that they concentrate a large number of nerve endings.

As it is an involuntary response, the pet does not “kick the air” because it wants to, but because its brain automatically sends an order after identifying some foreign stimulus in certain sensitive regions of its body.

Therefore, when you stimulate these areas by scratching, stroking or brushing them, you “fire” an automatic response that causes your furry friend to move its paw involuntarily, and you wonder, consequently, if dogs are tickled.

So, it is normal to want to know if dogs are ticklish or not, since, at first glance, it seems to be true, but it can also be only a reflection of the animal.

Is My ​​Vizsla Dog Ticklish?

First, it is essential to know what tickling is. Dogs are nervous excitement accompanied by involuntary laughter, which is generated by similar mechanisms in different species.

Yes, any breed of dog like Vizslas is ticklish. That is because dogs also experience a very particular sensation when stimulated in the most sensitive regions of their body, which is completely normal.

Don’t expect your Vizsla dog to start laughing, as it is highly unlikely that it will. However, to find out if your Vizsla dog is ticklish, watch its reaction to brushing or stroking its belly or sides. Surely, one of its legs will start to shake continuously, and that would mean something positive.

The scratch reflex is one of the most obvious demonstrations that dogs are tickled when you scratch or caress your pet’s areas that concentrate many nerve endings. However, our furry friends also communicate this strange sensation to us through their body postures, facial expressions and attitudes while being stimulated.

The scratch reflex is very important for dogs since it allows your pet’s brain to receive signals from the nerve endings that its skin presents when detecting a foreign stimulus.

These stimuli can be the following:

Likewise, it is important to emphasize that you should not confuse tickling with scratch reflex. The tickle on your Vizsla is produced when you scratch or caress some parts of its body, and you may notice that it strongly reacts when it moves its paw. However, if you stop stroking those areas, you can see that the canine will stop moving.

On the other hand, the scratch reflex occurs when the dog has an itch and will want to scratch intensely every minute until the itch is relieved.

What is a Tickle Spot?

Tickle spots are the specific spots and areas on your Vizsla dog’s body where it tickles.

Some of these tickle spots are:

How Do I Know if My Vizsla Dog Has the Tickle Spots?

While you are tickling your Vizsla dog in any of the areas mentioned above and you notice that it begins to move its paw at high speed, it is because you have found one or more of its sensitive points to caresses and touch.

Why Does My Vizsla Dog Turn on Its Back When I Tickle It?

Surely, your Vizsla feels very comfortable and at ease with you. Even if it turns on its back, it is because it wants a massage on its belly.

How Do I Know If My Vizsla Dog Likes to Be Tickled?

Keep in mind that, just like humans, dogs can enjoy or hate tickling.

It’s not that much fun for humans, and most people don’t like to be tickled as it’s excruciating. On the other hand, dogs are different. In this case, you will have to observe your dog’s reactions when you tickle the most sensitive areas of its body.

If it moves its paw incessantly while you caress its belly, it means that it really likes it. On the other hand, if it avoids contact and decides to get up and go somewhere else, it means that it is not comfortable with being tickled.

How Do I Know if My Vizsla Dog is Ticklish or Some Other Problem?

If you notice that your Vizsla is tickled frequently without you stroking it, it could be a bigger problem such as:

If your Vizsla dog responds sensitively or negatively to touch or has a habit of licking or scratching certain areas, be sure to consult with its veterinarian to rule out any serious problems.

Tickling is a good thing in the owner’s relationship with its dog. This type of stimulus is positive when you are playing with your Vizsla, whether at home, in the park or elsewhere. It is a sign of trust and fun between you.