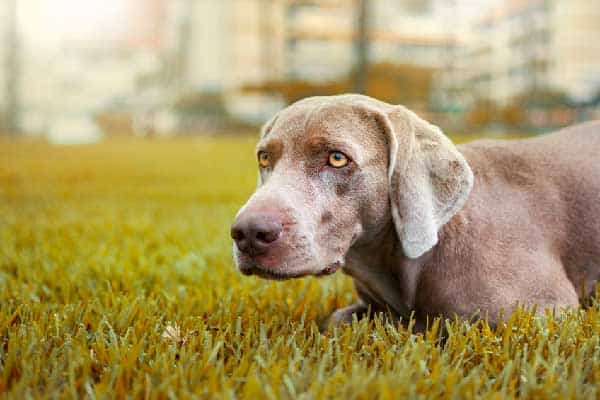 Weimaraner dogs are very special animals for humans. These canines are known to be overly athletic and energetic, especially when hunting. That is because, from birth, Weimaraners are trained to hunt and trap other animals.

Weimaraners are very intelligent, but they are also independent thinkers. That combination can make them a challenge when training. You have to be consistent and firm, but gentle when you want to teach your pet.

This breed is destined to be admired by all, and that is why many people acquire such a canine.

How Do I Know That My Weimaraner Dog is Smart?

It is no secret to anyone that all dogs in the world possess a certain degree of intelligence. One of the best ways to prove this is through their activities or the reactions they sometimes show to their owners.

These animals are highly intelligent and need activities to keep them busy to prevent destructive behaviors such as digging and nibbling.

Do not forget that dogs are capable of learning how to behave around other members of the pack. For example, adult dogs correct their young when they do something that is not appropriate within their canine universe, such as eating out of turn or aggressively biting. In the same way, they also reward for acceptable behaviors either by playing with them, feeding them or cleaning them.

Weimaraners are extremely intelligent when hunting. Through their instincts, they can develop great skills when chasing prey and calculating when they will.

Hunters used this animal for that reason. It possesses sharp and cunning senses capable of catching any small animal.

Of course, the Weimaraner is very similar to the Vizsla dog in intelligence. Both ways can study their environment and understand what is happening.

How Smart is My Weimaraner Dog?

There are many animals who know that it is time to go for a walk when we take their leash. This aspect is very important if you want to see the level of intelligence of your pet.

If your Weimaraner reacts when you take its leash for a walk, it means that it understands the message and is considered a good canine intelligence level.

Another way to know if you have intelligence is through its attitudes. You can teach it from a young age to clean its legs before entering the house. If your pet does this, it is because it has a mental capacity for memory.

If you have properly trained your Weimaraner dog, it will know exactly when you leave for work. If you are getting ready to leave your house and your canine is watching your every move, it is likely that it will go to the front door first and start wagging its tail. That can mean two things:

Whatever the reason, this attitude resembles the memory of the dog. Therefore, it could be considered that the Weimaraner has episodic memory, and its intelligence is high.

However, you have to try not to leave your pet alone for so long. Remember that Weimaraners suffer from separation anxiety when their humans are not home or have been left somewhere. Such an act can cause depression and sadness in the dog.

Intelligence has a variety of dimensions. In humans, we could subdivide intelligence into verbal ability, number ability, logical reasoning, memory, and so on.

The intelligence of dogs also has several aspects, among which we recognize four main branches:

It is related to all those skills that determine what it was raised for. For example, a dog that has been bred to herd animals. Its degree of intelligence is measured by its ability to gather animals and how it manages them.

It refers to the abilities that the dog has to learn things on its own. This type of intelligence can differ between dogs of the same breed.

It is the one that is related to the ability that the pet has at work and the obedience it presents. It is based on how the dog can come to follow the commands issued by humans.

It determines what the dog is capable of doing for humans. That is, this type of intelligence refers to the positive responses of the canine towards its “leader” (owner).

That is why when a Weimaraner responds quickly and effectively to the orders issued by its owner, it is considered an act based on the intelligence of the animal.

On the other hand, when dog clubs run a contest, they often measure that kind of intelligence as well. Through a series of controlled tests, the specialists observe the dogs’ performance during long sessions and then evaluate it. In that sense, it is not uncommon for a judge to spend 12 to 20 hours observing and evaluating a dog.

Can My Weimaraner Dog Understand Me When I Speak to It?

Dogs are the only animals that really study people’s faces. They evaluate the faces of their owners and do it with intensity.

Tests have shown that dogs are far superior to other animals in understanding people’s faces, especially if it is their human’s face. This early communication skill is the cornerstone of all forms of culture, including language.

When a dog shows that ability, it means that its degree of intelligence is above average, managing to surpass other animals. For example, chimpanzees.