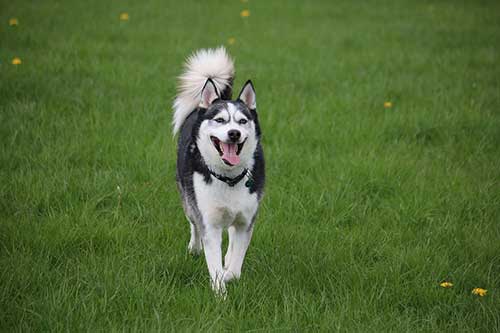 There has been a theory for many years that dogs and cats cannot get along. It is true that there are many cases where such an argument is demonstrated, but there are also felines and canines that can live together in the same place.

Cats are very bold, intelligent, neat, curious, and skillful cats when hunting. They build strong bonds with you as part of their family. Besides, they are usually very calm and are always lying down, either sleeping or resting.

On the other hand, dogs are very unruly, fun, intelligent, loving, and extremely loyal to their masters (they would even give their lives for them). It should be noted that they have an amazing role in helping people with visual, hearing, and motor disabilities and children with autism.

Do Huskies Get Along with Cats?

Many types of dogs and cats can be at peace with each other, but some dogs are the exception.

Huskies are dogs known as precious wolves and also for helping pull sleds in the snow, warm children in the cold and herding deer. These dogs are initially from Russia and have a very loving and playful personality with people.

Huskies will not usually get along with a cat. By instinct, they will want to chase, catch, and even hurt or kill them. It is your responsibility to train your dog so that it can get along with cats or at least be able to control its urges in the presence of one.

This breed of dog is predatory, which is why they consider cats to be easy prey, and it has been scientifically concluded that it is not a good idea to put these two animals together. However, there may be an exception, and that is to train and educate your Husky so that the relationship with the cat can work.

There have been several cases where people who own a Husky dog ​​and a cat say that the relationship between the two animals is excellent and that there have been no problems. However, it is necessary to remember and take into account that Husky dogs can return to their instincts at any time and will want to attack their prey, in this case, cats.

How Can I Get My Husky to Get Along with a Cat?

You should consider ​​relating your Husky dog ​​to cats before having these two animals in your house together. You can take your dog to a cat sanctuary, where it can become familiar with the feline’s smell and behavior. This practice aims to establish bonds between both animals so that the Husky gets used to the idea of ​​living with a feline.

The Husky and the cat must coexist little by little over time. You can put both animals in a room and watch their movements. It should be noted that this process can take weeks or even years.

Do not leave them alone in the room and keep in mind an escape route for the cat if the situation becomes complicated.

You have to teach your Husky what to do. The dog must be oriented to obey orders like “No,” “Stay there,” “Stay away,” “Leave,” and more. This training can last a long time, but it is necessary to get along with the cat if you want the Husky to get along.

It is essential to mention that there are relationships between Huskies and cats that have lasted for many years. At any moment, the dog is capable of releasing its animal instincts and wants to attack the cat.