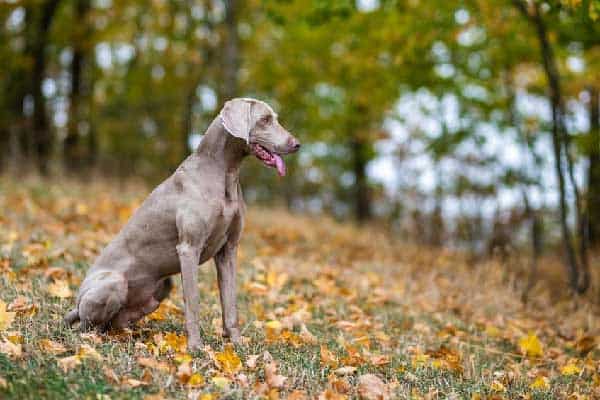 The Weimaraner is known as “the gray ghost” of Germany since its coat is silver-grey and its eyes are light. It is a dog with an athletic and muscular appearance thanks to its deep chest and thin hips. This breed has been trained to hunt small animals such as rabbits and birds for many years.

Currently, they are not only considered as hunting dogs but also as excellent pets for families. Weimaraners have great intelligence and a very pure heart when it comes to their owners. It should be noted that this dog is very loving with children.

Despite their energetic and loving personality, Weimaraners have a negative characteristic which is their tendency to bark a lot.

Compared to other breeds of dogs, the Weimaraner barks very frequently.

Why Does My Weimaraner Dog Bark a Lot?

A bored Weimaraner can start to excessively bark when it has nothing to do. Even when these canines are left alone for a long time, they can develop a destructive behavior in order to release all the energy they have accumulated.

Another reason for your pet to start barking is due to the need for attention. This type of breed, like Vizslas dogs, hates loneliness and is not used to staying still.

A Weimaraner can bark for many other reasons:

You should not worry about this because it is normal for Weimaraners to bark frequently, especially when their owners do not have time for them.

What Can I Do to Stop My Weimaraner Dog from Barking?

The first thing you have to do is never yell at your canine to stop barking. That is an error.

You can never stop your dog from barking, but you can calm it down with lots of exercise and interaction. This behavior is expected in Weimaraners, so you have to keep them busy playing until they get tired.

If you want your pet to stop barking, you can do the following:

You should consider the fact that your pet has a much sharper sense of hearing, smell, and sight than humans. Excessive barking is always triggered for some reason.