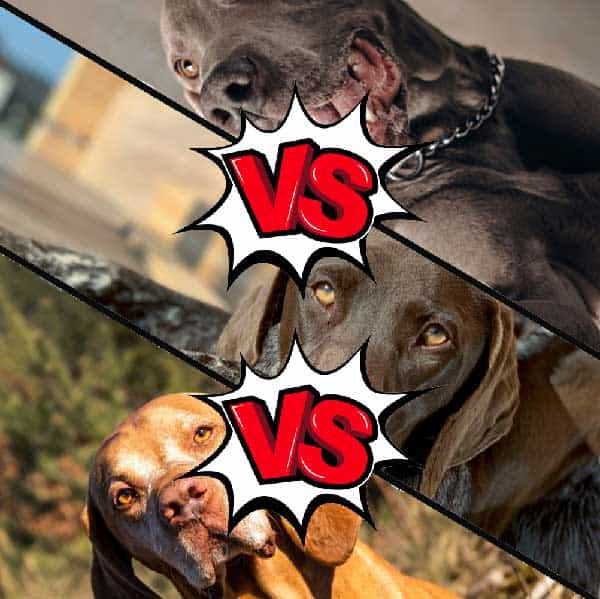 Human beings cannot be alone for long as we are filled with a feeling of loneliness and sadness. It is for that reason that we need the company of other people. However, we have to bear in mind that not all people have their relatives close by either in the same city or country. Therefore, we have the need to acquire a pet to keep us company.

There is a great variety of pets in the world that can vary between dogs, cats, rodents, birds, snakes, etc. As we all know, the most common of them is the dog since it is a loyal animal that will not only accompany us all the time but will also give us love. For that reason, we will talk about 3 breeds of dogs that perfectly meet these characteristics: German Shorthaired Pointer, Weimaraner and Vizsla.

The German Shorthaired Pointer is an intelligent and loyal one characterized by its ability to carry out different activities. They are very active, so they require daily exercise to maintain good physical condition.

This dog gets its name from its short, rough, and tough coat. The German Shorthaired Pointer has a lively, curious, and energetic personality, especially when it comes to doing some physical activity together with its human family members.

The Weimaraner is a canine known as the “Gray Ghost” precisely because of its beautiful silver-gray fur. It is one of the most elegant and attractive dog breeds in terms of its appearance.

This canine is characterized by being friendly, curious, loyal, and dynamic. The Weimaraner is very affectionate with the members of its human family, especially its owners, and they need to spend most of the time with them.

Lastly, the Vizsla is a canine known for its excellent hunting skills. They are used many times as hunter companions. These animals have a high level of physical activity and the need to exercise daily.

A Vizsla presents a sensitive personality but, at the same time, loving and kind to its owners, members of its human family, and even strangers. They tend to suffer from separation anxiety because they cannot bear to be left alone for long periods.

The German Shorthaired Pointer has a rather confusing history as its origin has not been fully clarified. It is estimated that this dog emerged in Germany in the 1600s through the crossing of different breeds, among which we can highlight the Spanish Pointers and the English Pointers with the aim of creating a breed with skills for hunting, searching, etc. The German Shorthaired Pointer was recognized in the 1800s and became very popular with German hunters.

The Weimaraner has its origin in the early 19th century. The ancestors of these dogs belonged to the aristocrats of Weimar. At that time, the Grand Duke Charles Augustus, who was fond of hunting big game, met these gray dogs and decided to develop a very versatile breed for hunting.

These canines were used at that time mainly for hunting big game. At the beginning of the 20th century, this breed began to be known in other countries such as the United States.

The Vizsla is a breed of dog that has its origin in Hungary. These canines belonged to the Magyar tribes which invaded Central Europe during the Dark Ages. Dogs of this breed have always been known for their hunting skills.

After the First World War and other unfortunate historical events, this breed was on the brink of extinction, leaving only 12 dogs of this type. However, thanks to several groups of breeders who love Vizslas, this species managed to survive to this day.

This breed features a tall, muscular, shapely body with a strong back and deep chest. The head of this canine is elongated, its skull is wide, its snout is long and deep, and its eyes are medium and dark in color.

Additionally, it has medium and floppy ears with rounded tips. The coat of the German Shorthaired Pointer is characterized by being short, hard, and rough, which can present different color patterns:

The most characteristic physical feature of this canine is its beautiful short silver-gray coat. That is the reason why this dog is called “Gray Ghost.” A Weimaraner has a beautiful, lean, muscular and robust body.

The head of this canine is broad, its nose is flesh-colored (gray at the base), its back is relatively long, and its chest is deep. The eyes of a Weimaraner can vary between light amber and dark amber. We have to take into account that the puppies of this breed have blue eyes. In addition, it has wide, long, and floppy ears.

Finally, the Vizsla is another of the canines belonging to medium-large breeds. A male Vizsla height varies between 56 cm and 66 cm, while a female can measure between 51 cm and 61 cm. In the case of its weight, a male of this breed weighs between 20 kg and 27 kg while a female between 18 kg and 25 kg.

This breed of dog is characterized by having a beautiful, short and hard golden-oxide coat. The color of its eyes (brown or amber) harmonizes with the rest of its body as well as its reddish nose.

The body of a Vizsla is muscular, slim and shapely. Its head is broad, its muzzle is shorter than its head’s length, its chest is wide, and its back is firm and straight. Also, like the previous breeds, it has thin and floppy ears.

German Shorthaired Pointer vs Weimaraner vs Vizsla: Personality and Behavior

The German Shorthaired Pointer is an active, lively and curious dog who loves to spend time with its owners outdoors. They are considered excellent pets for families since they are usually affectionate and friendly with all their loved ones and especially for getting along with children.

However, it is essential to keep in mind that they must be trained from puppies so that they learn to socialize not only with children but also with strangers and other animals.

This dog is very intelligent and skilled at performing different types of activities such as hunting, searching, tracking, etc. This aspect makes them very active and energetic dogs that should not be confined in small places or inside the house for a long time since, as we know, they need to exercise to release all the energy they accumulate.

A Weimaraner dog is characterized by being very curious, loyal and dynamic. These canines have a sweet and caring character, and they like to spend most of the time with their family members, whether they are children, adolescents, adults or the elderly.

However, because they are very energetic, it can be dangerous when they are around children, so it is advisable to train them from puppies and supervise them when they are with them.

Despite being friendly and loving with people, it is important to note that they can be shy and distrustful of strangers. In the same way, they can get along with them as long as they have been previously trained to socialize. We also have to take into account that they have a certain protective instinct, so they will alert their owners in case they feel any danger.

The Vizsla is a canine known mainly for its high physical activity level and its abilities during hunting. That makes it a very active and energetic dog that loves to do any type of daily physical exercise, including walks, games, agility training, etc.

It has a loving and friendly character with its owners, members of its human family, and even strangers and other animals. However, their personalities can be sensitive, and they can easily feel sad and anxious when they have been left home alone. That’s because they hate loneliness and need to spend most of their time with their loved ones.

The life expectancy of a German Shorthaired Pointer varies between 12 and 14 years. A Weimaraner can live between 11 and 14 years and a Vizsla between 12 and 15 years. We have to take into account that these dogs can live more or fewer years depending on the diet, care, and lifestyle provided by their owners.