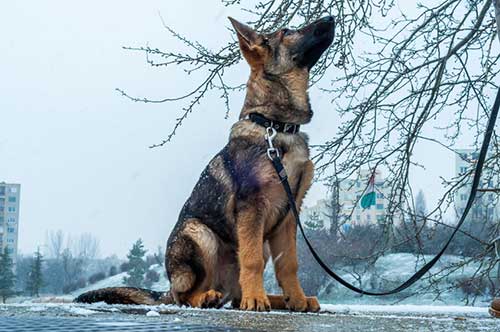 The German Shepherd is one of the most intelligent breeds that exist, and they are considered excellent working dogs. They are large, strong, and above all, obedient canines. They are fantastic pets for families that provide many hours of physical activity. It should be noted that they are mostly used as police dogs, guardians, or rescue dogs.

These dogs require people who are capable of training them properly. In this way, the German Shepherd can be balanced; that is, it can be friendly while doing its activities as a protector or guardian. Failure to train them could make them aggressive and dominant dogs.

The German Shepherd has a history that was born in the 19th century in Germany. This canine originated as a result of the crossing of several shepherd dogs of that time. These experiments were carried out with the aim of creating animals with various characteristics and qualities such as intelligence, resistance, work capacity, and herding.

Max von Stephanitz, a cavalry captain, had the idea that all dogs should be bred for work. In 1899, during a dog show, Max discovered a dog that met these characteristics and had the name Hektor Linksrhein.

This dog was smart, strong, and noble. He bought this canine and began testing it by crossing it with other canines. The result was an animal recognized as the first registered German Shepherd, which was called Horand von Grafrath.

This breed became popular after the First World War when it participated as a patrol and sanitary dog. Years later, the canine became known in England, and its name was changed to German Shepherd in 1971.

How Big Do German Shepherds Get?

The size that a German Shepherd can reach will depend on several factors, such as its sex or diet.

Height of a German Shepherd

Weight of a German Shepherd

The weight and height specified above places this breed in the category of large dogs. The size they present makes them excellent working and herding dogs. That is because they have muscular and agile bodies.

In addition, their body size is excellent since it allows them to have more resistance than other canines, which enables them to train and carry out physical activities daily. That also applies to the work they do.

When are German Shepherds Fully Grown?

It is one of the questions that people who want to acquire a dog of this type should ask themselves. Each dog reaches its maximum state of maturity at a certain age.

In the case of German shepherds, they reach their full size between 18 (one and a half years) and 24 (2 years) months of age. That means that, on average, when that time passes, the German Shepherd will no longer grow (in theory).

However, as we have said before, the size and full development time will depend on several factors. Some of them can be their diet or even the environment where the canine lives. In Europe, there are certain types of German Shepherd that reach their maximum size at 3 years.

There are many people looking for a working dog that is not very big. In this case, the German Shepherd might not be a good option since they are big dogs. If you live in an apartment or a small house, having a German Shepherd may not be suitable.

Adequate Food for Its Development

Improperly feeding a German Shepherd could affect not only its health but also its development and proper growth. The diet of a German Shepherd must be of high quality; that is, it must contain many nutrients. It should be noted that puppies, from birth, must feed on their mother’s milk until 6 or 8 weeks of age. That is essential for its development.

The amount of food we give a German Shepherd must be controlled and will depend on the age of the pet. This canine should not eat raw food or chipped bones as they could have health problems. The most recommended is to mix fresh food for them that includes meat, fish, or vegetables.

It is essential to go to the vet since he will be in charge of giving us dietary guidelines about how much food to give our dog and how many times a day to do it. As we have said before, that can depend on several aspects.

There are breeds originating from the mixture of a German Shepherd with a dog of another kind. Obviously, the maximum size of each of them will vary concerning the characteristics presented by the other canine. Some of them are: