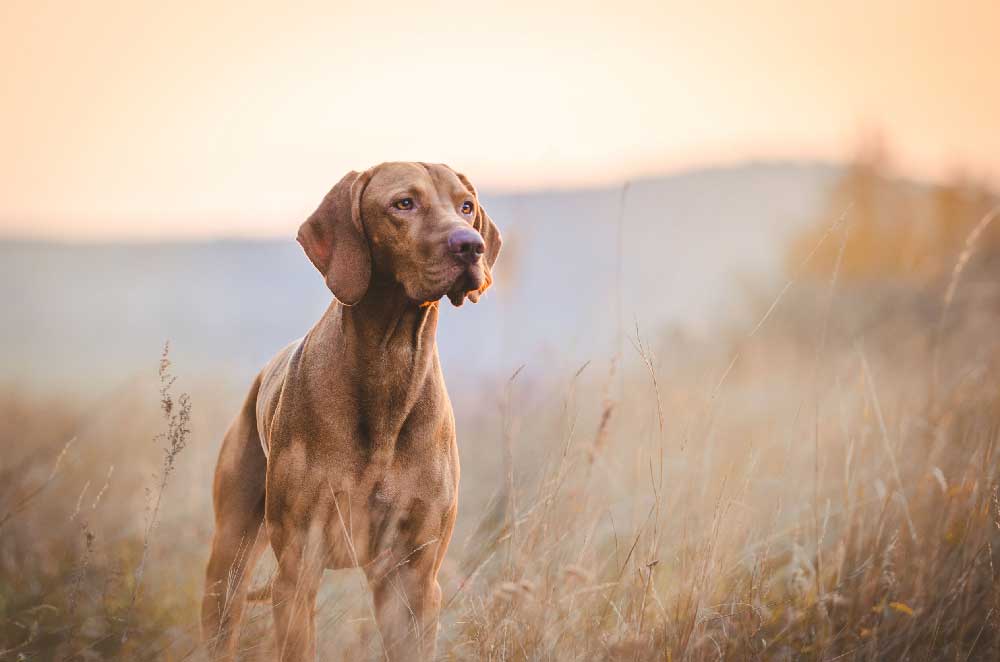 Vizsla, the recognized name for the Hungarian Pointers, have a history matching their regal appearance with their elegant humans. Once a companion of Aristocrats the K-9 blood line was nearly bred to extinction in the late 19th century due to demand. Over time the Vizsla has been on the rebound and gracing the lives of mankind in a multitude of countries.

The farthermost recorded history regarding the Vizsla as a companion to humans dates back to the early settlers of what is modern day Hungary. The Magyar tribes are depicted on stone, etched with of their dog, an ancestor of the Vizsla, and Falcon. K-9 and bird working together in the pursuit of sustenance for their human and themselves. It is a classic tale of man and his best friend.

In the years of the Austro-Hungarian empire Vizla’s were the chosen hunting dog. The color of the Vizsla’s coat, being a solid golden-rust, and similar eye color aided the hunting dog in its camouflage ability. Both a Pointer and Retriever, it was a dog bred for its ability to point out the prey and locate the fallen animal for the hunter they worked with. Endangering the breed because of something as simple as supply and demand.

Over-breeding or inbreeding was not what endangered the four-legged friend. Mixed breeding to meet the needs of would be owners were almost their down fall. At one point there were around twelve pure-breds of the breed remaining.

On November 25, 1960 the Viszla became a recognized breed with the American Kennel Club (AKC). Since then the Vizsla breed has went on to be the first AKC Triple Champion, placing first in three events over a life-time. Kai was the first dog of any breed, a Vizsla at that, to win in show, obedience, and field and that was in 1980. Two decades later a Vizsla beauty named Chartay dominated the breed standard and took the first quintuple championship with the AKC. Those are some furry breeches to fit into.

Yes, the Vizsla is a working dog. That means they are active and will become bored if their human is not engaging with them. Vizsla have been tasked as emotional companions, visually impaired support guides, and those superior sniffers have been utilized by the TSA. They are notable in search and rescue operations, and in the US were on scene at ground zero during 9/11 as one of many breeds representing K-9 heroes. Unfortunately, none of the over 300 four-legged heroes are alive today.

For a breed that is known for obedience and intelligence the Vizsla is a top notch companion. Care for the animal is simple as their coat is short and sleek like many Retrievers. With a history dating back thousands of years the breed still gains recognition among enthusiasts and clubs world-wide.

Paddock, A. (Dec. 28, 2015) The Vizsla Puts the “V” in Versatile, https://www.akc.org/expert-advice/lifestyle/the-vizsla-puts-the-v-in-versatile/