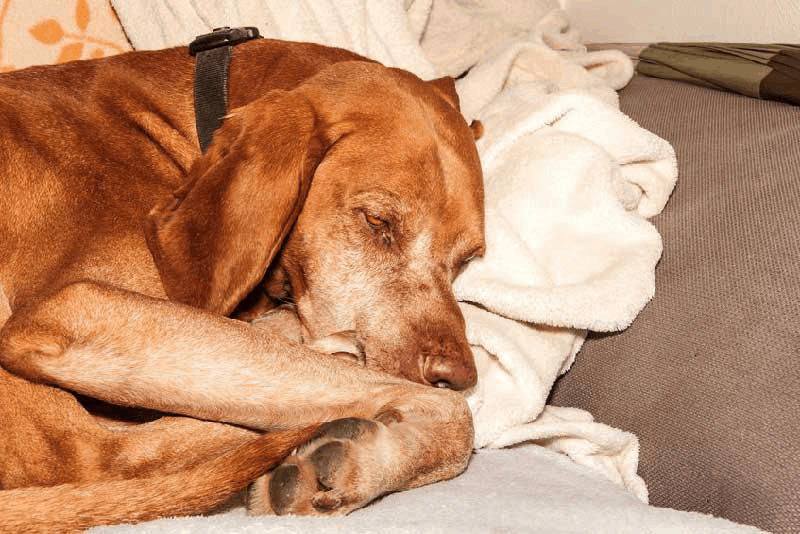 Dogs make excellent pets because of the love and loyalty they offer to their owners. However, having a pet of this type is a great responsibility. For that reason, as owners of a canine, we must know each of the necessary aspects to provide an excellent lifestyle.

One of the most interesting dogs is Vizsla. This breed is characterized by its high level of physical activity and its abilities during hunting. They are canines that need a lot of exercises every day. They have a sensitive personality that can feel sad and anxious if they are left alone for long periods, which would affect their health.

The first thing you should know is that this breed of dog is usually healthy since, as we have said, they are very active and need to exercise daily. If we add good nutrition and care to the above, then our Vizsla will be healthy for most of its life. Unfortunately, there are genetic diseases (some of them hereditary) that our canine can suffer.

It is for this reason that it is necessary to take care of our Vizsla properly and take it to the vet regularly to prevent any of these genetic predispositions from affecting our pets.

The most common genetic diseases in Vizslas are:

It is a very common chronic neurological disorder in any breed of dog. It is essential that you know that this disorder is hereditary, especially in Vizslas. There are several types of seizures that a dog of this type can suffer:

The first type of seizures is caused by the brain’s reaction in response to a problem such as stress, fever, head trauma, contact with toxins, brain injuries, or metabolic imbalances (low blood sugar or organ failure).

Secondary seizures are caused by a transitory stimulus that affects brain activity, that is, through a stroke, trauma or brain tumor. Finally, primary seizures are those that occur in the absence of the above causes and usually affect only a small part of the brain.

As the owner, you should know that the first epileptic seizure occurs between the first 6 months and 3 years of age of your Viszla. However, in some instances, it may barely happen at 5 years.

When a Vizsla suffers from epilepsy, many owners worry too much, which is normal since they love their pets. However, it is vital to remain calm in these situations and follow the following recommendations:

Epilepsy is not a life-threatening disease, but it is important to know that it could be in case your dog bites its tongue or hits its head during seizures. The most advisable thing is to go to the veterinarian since he or she will be in charge of providing you with all the necessary information in addition to prescribing the medications that your canine will need.

Hip dysplasia is one of the most common genetic problems in this breed of dog. It is a malformation in the bones of the hip and femur, which can later cause osteoarthritis. Hip dysplasia is hereditary, and it is for this reason that today breeders are very careful when selecting a Vizsla for breeding.

This disease is very easy to identify as it causes excessive pain and lameness in our pets. This abnormality can not only affect our canine’s hip but also its elbows.

Our Vizsla’s bone and joint problems can be a significant inconvenience, especially as they age. The canine may have great difficulty walking and even getting up. Some other symptoms that we can detect if your dog suffers from this disease are:

Genetics is not the only cause of this disorder. Food, little physical activity and little sunlight are other triggers.

There are several bleeding problems that our Vizsla can suffer from. One of the most common is Von Willebrand’s disease. It is a disorder caused by low levels of blood-clotting protein. The most common symptoms of this disease are:

It should be noted that this disease can affect a Vizsla regardless of their age and gender. The veterinarian will be responsible for detecting this disorder through a blood test or the clotting time of the same.

Von Willebrand disease is not the only bleeding disorder that a Vizsla can suffer from. Another of them is hemolytic anemia, which is a hematological alteration produced by the decrease in erythrocytes. This decrease is due to its premature destruction.

Thrombocytopenia is another disease of this type that affects middle-aged Vizsla and any gender (although it is more frequent in females). This disorder refers to a low number of platelets in dogs.

In extreme cases, it can produce intense internal bleeding that could lead to our Vizsla’s death. Some symptoms that allow us to identify thrombocytopenia in our dog are:

One of the most common is glaucoma. It is an eye disease that can affect dogs in a hereditary way and, on certain occasions, for other causes. This condition is very serious for the Vizslas and any other dog, and that most of the time, it produces blindness, which is something fatal for this type of canine who like to do physical activities.

Glaucoma is increased intraocular pressure (IOP). As a consequence, the optic nerve and the retina are negatively affected, progressively causing loss of vision. As we have said, the main cause of this disease is genetic or anatomical alterations. However, other types of ocular pathologies or trauma can cause this disease.

The symptoms of glaucoma can be varied:

This disease can be treated as long as you take your Vizsla to the vet as soon as possible. If your pet already has advanced symptoms and its eye is in a chronic stage, then it is very likely that it is already blind, so it cannot be cured.

Another of the most common eye problems in dogs is cataracts. This condition can also cause blindness in Vizslas, especially those of advanced age. If our dog’s eyes are opaque, then it is a clear indication of cataracts. Fortunately, an effective method of treating it is through surgery.

There are several types of cancer, and some of them may be prevalent in Vizslas. In fact, this disease is one of the leading causes of death in dogs.

Lymphoma is the type of cancer that most frequently affects this breed of dog. It is a progressive disease that primarily affects the organs of the lymphatic system (spleen or lymph nodes). This disease produces abnormal lymphocytes, which can appear in almost any part of the canine’s body.

Lymphoma can be successfully treated through chemotherapies. However, you must bear in mind that the costs of treatment are high. The disease can be detected through a blood test, so it is essential that you give your Vizsla a blood count at least twice a year. Apathy and weight loss are symptoms that can appear with this disease.

Hemangiosarcoma is also a type of tumor that affects Vizslas. These tumors can form in various organs of the body, especially the spleen. Some symptoms can be bleeding, syncope, cardiac tamponade, etc. The most chosen treatment is surgery.

Another terrible condition is mast cell tumors. They are a type of skin cancer that tends to appear more frequently in Vizslas. The bumps that appear on your canine’s skin are often similar to other skin conditions or lesions, so it can be not very clear to identify what it really is.

For that reason, it is crucial to take it quickly to the vet since if it is this type of cancer, it must be surgically removed as soon as possible.