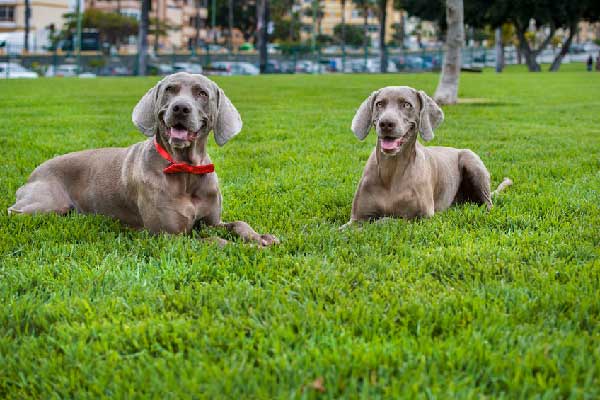 Dogs make excellent pets because of the love and loyalty they offer to their owners. However, having a pet of this type is a great responsibility. For that reason, as owners of a canine, we must know each of the necessary aspects to provide an excellent lifestyle.

Caring for any breed of dog is a huge responsibility, and the Weimaraner is no exception. This canine is characterized by the beautiful silver-gray coat that allows it to be known as the “Gray Ghost.” It has a high level of physical activity and excellent hunting skills. In addition, they are very active and energetic dogs that need to exercise every day. That is the main reason why Weimaraners are quite healthy.

Similarly, if we add good nutrition and care to the above, then our Weimaraner will be healthy for most of its life. Unfortunately, there are genetic diseases (some of them hereditary) that our canine can suffer.

It is for this reason that it is necessary to take care of our Weimaraner properly and take it to the vet regularly to prevent any of these genetic predispositions from affecting our pets.

The most common diseases or health issues in Weimaraners are:

This health problem mainly affects medium and large dog breeds. It is an acute illness or syndrome that produces great pain. That occurs when a rotation of the stomach is carried out in the canine’s abdominal cavity due to a strong dilation caused by excess gases or air.

Generally, gastric torsion is the product of excessive consumption of food and liquids that lodge in the animal’s stomach. That can be accelerated and worsened if the Weimaraner exercised right after eating, causing the stomach to dilate due to the canine’s bones, muscles, and ligaments bearing the excessive weight.

Exercising before or after eating is not the only cause of this disease. Some others are:

As we have said, the ligaments’ lack of ability to retain the pressure that has caused the dilation makes the entrances and exits of the stomach become obstructed, preventing the passage of food and liquids through the digestive system. This disease can also affect the spleen of the canine, causing necrosis.

Some symptoms that the Weimaraner can present are:

When we notice any of these symptoms in our Weimaraner, it is vitally important to take it immediately to the vet as it can be very dangerous for the health of the canine. The specialist will stabilize the dog by placing an intravenous catheter and then flushing the stomach with a tube through the esophagus to decompress it.

The most recommended to prevent your Weimaraner from suffering from this health problem is by controlling their food portions. It is not good to overfeed this type of canine and less when it is an energetic and athletic animal. Make sure to set meal times, avoiding those of your daily exercise routine.

It is one of the most common diseases not only in Vizslas but also in Weimaraners. They are genetic diseases that usually appear at 5 or 6 months of age of the canine. Hip and elbow dysplasia fall into the category of muscle problems.

Regardless of whether the problem occurs in the canine’s hip or elbow, a slight limp will appear that will prevent the Weimaraner from continuing to have an active quality of life.

In the first case, hip dysplasia is a malformation of the hip joint. We have to clarify that the majority of Weimaraners are born with healthy hips. Still, due to these canines’ genetic makeup, the soft tissues around said joint develop abnormally.

Symptoms of hip dysplasia include lameness, resistance to any movement related to extension and flexion of the hind legs, pain in the hind legs, stiffness, difficulty climbing inclined surfaces, and difficulty participating in the daily activities that you love so much.

As for elbow dysplasia, we have to say that it is a malformation of the elbow joint that causes a slight limp in the canine’s front legs. The signs of this disease appear between the first 4 and 10 months of age of the Weimaraner. However, depending on the development of the animal, this malformation can occur in the canine’s adult age.

Apart from lameness, swelling is another of the symptoms that a dog can present in the elbow area when suffering from this disease.

It is a broad term that encompasses different types of problems related to the spinal column, middorsal septum, medullary canal, and the fetus’s neural tube that can affect the health of the canine.

This problem occurs when a Weimaraner is born. That is due to a defect in embryonic development. For that reason, dogs of this breed usually have a defective spinal canal that, in many cases, can cause certain problems such as neurological abnormalities.

A Weimaraner puppy with Spinal Dysraphism may have difficulty walking. In the case of an adult canine, we can notice the problem in its hind legs since they usually make a simultaneous movement like the jumps made by rabbits. Weakness and lack of coordination are other symptoms present in this disease.

Hypertrophic Osteodystrophy or HOD is a disease that affects young, medium to large, fast-growing dogs. The main symptoms are pain and claudication.

This disease affects Weimaraners through an inflammation of the bone spicules of the long bones, specifically in the metaphysis. It should be noted that such inflammation is not infectious.

The swelling around this area causes the metaphysis to widen, generating even small fractures of the bone spicules in this part of the bone.

In turn, HOD can cause periostitis ossificans, which is a painful inflammation of the outer layer of bone. In puppies, they may have symptoms of diarrhea and pneumonia.

There is no clear cause of this disease, but according to various studies, it is suspected that it may occur in a hyper-reactive response to vaccination.

It is a disorder that affects the eyes. Although it is not a disease, it can occur when a Weimaraner puppy is born and progressively lead to eye diseases. This condition is recognizable because it causes two rows of eyelashes to exist in a single eyelid (generally the lower one, although it can also occur in the upper one).

Distichiasis can be dangerous for the eyes of a Weimaraner as the constant rubbing between the lashes and the cornea generates excessive tearing and continuous irritation in that area. Because of this, eye infections or other diseases such as Entropion are likely to occur.

The problems that this disease can cause are:

Entropion is one of the most common eye diseases in Weimaraners. We can know that a canine suffers from this condition when its eyelid folds into the eye, which causes a lot of pain. This situation progressively reduces the canine’s vision and can become dangerous and irreversible for the cornea if it is not treated by a professional in time.

For that reason, the hygiene of the eye of our Weimaraner is very important, and we must beware of any symptoms that it may present.

Weimaraners are genetically prone to some types of tumors, such as Hemangiosarcoma. It is a malignant tumor originating from the vascular endothelial cells that can occur in any organ with this type of epithelium.

The most frequent locations of these tumors are the spleen, the skin, and the right atrium. Some common symptoms that Hemangiosarcoma presents are:

Surgery is the most recommended treatment method, mainly when the problem occurs at the heart level. Even after surgery, the canine may require adjuvant chemotherapy.

Hemangioma is also another type of tumor that can be common in dogs of this size. It is a benign neoplasm of endothelial origin. This tumor occurs in any part of the body, being more common in an elderly canine. It can also affect different organs such as the spleen or the kidney.

Like Hemangiosarcoma, this type of tumor must be treated with complete surgical excision as it is the most effective and recommended treatment.

These tumors appear in the form of lumps or firm masses, either solitary or multiple, and which can be soft or fluctuating. Also, depending on their development, they can be dark red, blue, black, or even white.