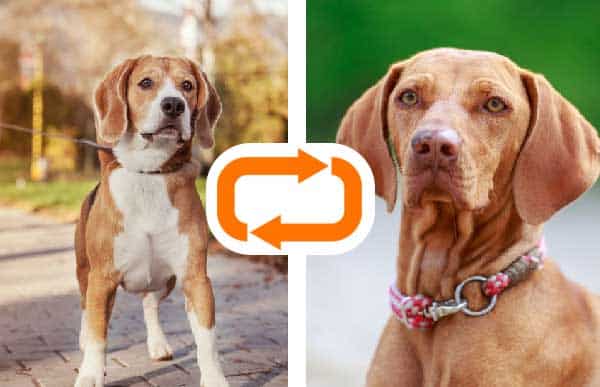 It is very common throughout the world for many groups of breeders to cross different dogs’ breeds to create an animal that shows the characteristics of its parents. It is for this reason that there are many breeds of canines from the mixture of two of them, and each one has excellent characteristics as a pet.

The variety of dog breeds that exist is immense, but two of the most interesting are the Vizsla and the Beagle. One of the most significant differences between the two is that the Beagle is smaller than the Vizsla. As a result of crossing two canines of this type, it is possible to obtain one with excellent qualities as a pet and even as a hunter.

The Vizsla is an animal characterized by extraordinary hunting abilities. They are canines that have a high level of physical activity and therefore require regular exercise.

Training is something that should always be in their lives, not only so that they are stimulated physically but also mentally. The personality of a Vizsla is sensitive as they cannot stand being left alone for a long time because they often suffer from separation anxiety.

Beagle is also one of the most popular dogs when it comes to hunting. They are excellent at searching and finding prey. Besides, they are very active and energetic animals that require more than one hour of daily exercise.

This breed of dog is also considered an excellent pet as they love to play and get along with children. An important fact is that they can also get along with other animals as long as they have been used to it from puppies.

This dog originates from the mix between a Vizsla and a Beagle. This mixed breed exhibits the dominant characteristics and qualities of its parents.

The Vizsla Beagle Mix is ​​a canine characterized by being affectionate and having a lot of energy. They are animals that love to do any activity together with their owners and loved ones. As we know, the Vizsla and the Beagle have different sizes, so the crossing of both breeds will generate a canine with an average size.

One of the characteristics that most define these dogs is their great ability to hunt. They can track any prey quickly due to their extraordinary sense of smell. It is for that reason that they are considered not only excellent pets but also skilled hunter companions.

The first thing we have to highlight regarding the Vizsla Beagle Mix’s physical appearance is ​​its size. A Vizsla is a medium-large dog breed, while a Beagle is characterized by being smaller.

The size of a Vizsla can vary between 51 cm and 66 cm, and its weight between 18 kg and 27 kg. In the case of a Beagle, it can measure between 33 cm and 41 cm and weigh between 9 kg and 11 kg. It should be noted the size of each will depend on their gender and age. The Vizsla Beagle Mix will be average in size, so it will not be too small or too large.

The coat of this mixed breed tends to be very similar to that of a Vizsla. It is hard and short and has a color that varies between gold-oxide and reddish. However, depending on its parents’ dominant qualities, the Vizsla Beagle Mix may also feature a relatively white spot on its chest.

The head of this canine is elongated, its chest is deep, and its back is straight. It has large, floppy ears that stand out, and its eyes are large, round, and brown or amber in color.

The personalities and behaviors of both a Vizsla and a Beagle are similar. A Vizsla Beagle Mix is ​​a sweet, cuddly, affectionate, and friendly canine with its loved ones, especially with its owners. However, they also try to get along with family friends, strangers, and other animals, including cats and dogs.

The mixture of both breeds makes this canine very active and energetic, so it usually shows a high level of physical activity. These canines need a daily exercise routine in which you allow them to run, jump, play, and do any physical activity. In fact, it is also a good idea to take them out for a walk either on foot or by car.

Both the Vizsla and the Beagle can suffer from separation anxiety, so it is a characteristic that will indeed be featured in a Vizsla Beagle Mix.

For that reason, it is essential that their owners or members of their human family spend a lot of time with them and do not leave them alone for long periods. These canines hate loneliness, so they could feel sad and anxious, which would be serious for their health.

In the same way, if they are left at home for a long time, they can develop destructive behavior since they are animals that need to be entertained and do any outdoor activity.

The Vizsla Beagle Mix is ​​not a dog that sheds frequently. In fact, it only does it a few times a year. Therefore, they do not need too much attention in terms of their fur since it is usually smooth and dense, so it will only need to be brushed approximately 2 times a week.

It is also important to note that this breed of dogs should only be bathed when necessary as they generally do not smell bad and do not get dirty easily.

Both breeds of dogs used for this cross are energetic and need a lot of daily exercises. The most advisable thing is to provide it with 2 daily exercise sessions since that will be enough to stimulate it physically and mentally. In fact, exercise is a good way to tire it out, greatly benefitting you if you don’t have more time to attend to it.

One of the most important things is food. You must provide such a dog with a balanced diet based on many nutrients and vitamins. Avoid giving it excessive portions of food as it could begin to gain weight, and therefore its health would be affected.