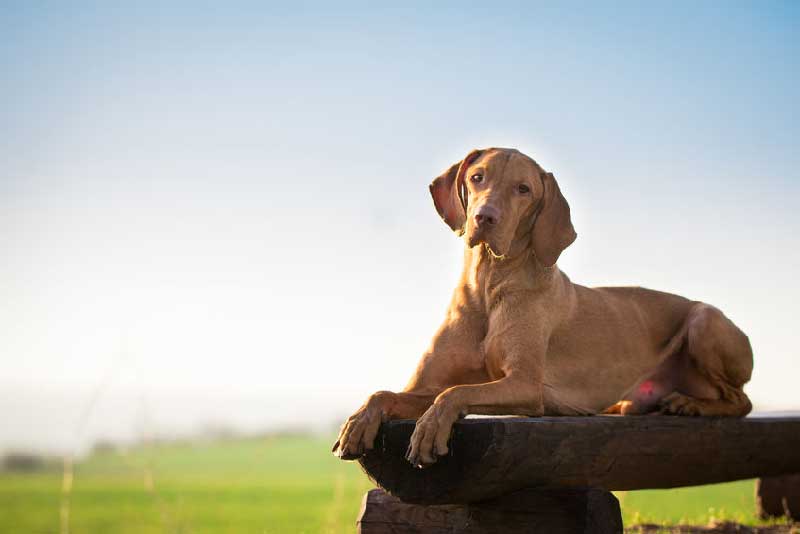 Vizsla dogs are incredible pets and companions that are characterized by being excellent hunters. Their high physical level allows them to do a wide variety of outdoor activities. That is why people have acquired them over the years as companions during hunting activities.

They are quite active dogs that must do physical exercises daily (at least 1 hour per day). They are affectionate and loyal to their owners and have a sensitive temperament, so they must be treated appropriately so as not to hurt their feelings.

Owners of these dogs should establish regular training to keep them active and fit. However, you should be careful not to press them. On the contrary, the intention is to interact with them lovingly and help them improve their physical condition.

Each of these features, especially the physical ones, are mainly due to the anatomy of this majestic animal. We must emphasize that the appearance of this dog is elegant and athletic that make it look strong and robust but at the same time beautiful.

The physical features are the aspect that most identifies a Vizsla since anatomically it has certain peculiarities that make it attractive.

The size of a Vizsla is one of its most remarkable attributes. It is considered to be a large canine. This dog has an approximate height between 58 and 64 centimeters in the case of males, while females can vary between 54 and 60 centimeters. These numbers are just an average since, in the end, it will depend on the diet you provide your Vizsla and the amount of daily exercise it does.

The large size of these dogs makes them look with a robust and muscular body without losing their elegant appearance.

The Vizslas have an athletic and muscular body. They have a fairly long, muscular and slightly arched neck.

Its body has uniform proportions that keep shoulders and elbows close together. The back of this type of dog is firm, straight and short with a slight inclination from the dorsal line to the tail.

The region of the cross is muscular and well marked. A Vizsla’s chest is broad and deep, and its ribs are moderately arched. These features allow them to carry out any movement freely.

Like the body, the limbs of this animal are usually muscular. Its legs have strong bones, and its elbows are close to its body. If we talk specifically about the hind legs, the Vizslas hocks are in a relatively low position. The paws of these animals are slightly oval and have strong fingers and nails.

The skull of a Vizsla is slightly arched and looks strong, proportionate, and wide. In the upper part of the head, we can clearly see the middle depression that runs through the occipital protuberance to the forehead. This depression is known as “Stop” and is usually moderate in the Vizslas.

Despite the wide skull, the head of these dogs is slim with good proportions. They present a slightly protruding square muzzle. The lower jaw is properly developed and has good musculature allowing it to make strong bites. Unlike other dogs, their lips do not usually hang.

The eyes of a Visla are medium and oval in shape. The color of the coat highlights that of its eyes which is generally yellow, amber or brown. These features allow them to have a bold look.

The ears of this type of dog are large, thin and generally hanging at the level of their cheeks. Its ears cover the ear canal without affecting its hearing.

The tail of these dogs is thick at the base, but as it progresses to the other end, it grows narrower and more extended. Its length is sufficient to graze the hock, which is a joint found in the hind legs of quadruped animals.

It is usual for this type of dog to be in constant motion. When that happens, its tail curiously remains firm horizontally.

This beautiful dog has short, thick and bushy fur. Generally, it covers the entire body of the Vizsla. It is important to note that unlike other dogs, this breed does not have an internal coat of hair. That allows the Vizslas to protect themselves against cold weather.

The color of the coat is usually golden oxide, and on some occasions, it can present one or several white spots on the chest of the animal.

These majestic dogs have more robust physical features than most other dogs. Perhaps that is because its origin is that of the oldest. Its anatomy is quite muscular, and this allows it to have enough resistance to carry out physical activities most of the day.

In addition, it is not only a dog that is used for exercising or hunting, but it is also an incredible and beautiful pet with an elegant appearance despite having a muscular body.

Maybe you can find Vizslas with a slightly different anatomy, and it is perhaps due to a possible crossbreeding. It is even proven that for centuries, Vizslas dogs had emerged from a series of various crossbreeds of foreign dog breeds.