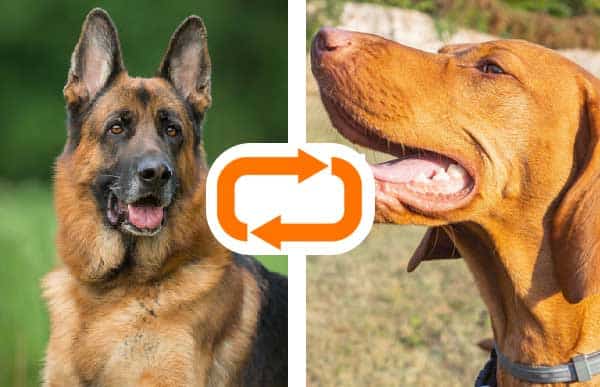 People’s curiosity has led them to create breeds of dogs with unique characteristics throughout history. Through crossbreeding, many groups of breeders have managed to obtain canines with features unique to their parents.

These types of dogs not only turn out to be excellent pets, but they can also have the enhanced abilities of their parents to perform any activity.

There are two great dog breeds characterized mainly by the activities they perform effectively: the Vizsla and the German Shepherd. The main differences between these two breeds are their physical appearance and the type of abilities they possess since the Vizsla excels mainly in hunting.

At the same time, the German Shepherd can be amazing herding, police, guardian, military, guide or search (and rescue) dog. However, they are both working canines.

The Vizsla is an attractive animal whose abilities excel in hunting activities. They are canines with a high level of physical activity and require daily exercise not only to be entertained but also to be in shape. This breed has a very sensitive personality as they are susceptible to loneliness.

They hate being alone for long periods as this is a situation that can make them sad and anxious, affecting their mental and physical health in the future.

The German Shepherd is a dog known for its fidelity to its loved ones, especially its owners. They are characterized by being hardworking canines as they have skills to perform different types of activities.

It is for that reason that many people use them as police dogs, herding dogs, etc. They are one of the breeds with the greatest courage and bravery without resorting to aggressiveness. They are very easy to train, especially through positive reinforcement.

This breed of dog was originated through the mix between a Vizsla and a German Shepherd. This cross’s objective was to create an active and energetic canine with extraordinary abilities to carry out different activities. Like all hybrid breeds, it will acquire the dominant qualities of its parents.

The Vizsla German Shepherd Mix is ​​a hardworking, friendly, affectionate, sociable and reliable canine. It stands out for its intelligence and its ability to learn new tricks quickly. This breed is also very loyal and protective when it comes to its owners or members of its human family.

The care of a dog of this type will depend on its parents’ physical characteristics, be it those of the Vizsla or those of the German Shepherd.

The physical appearance of a Vizsla and a German Shepherd is their most outstanding differentiating characteristic, although we must bear in mind that they are similar in size.

Both breeds of dogs used to create the Vizsla German Shepherd Mix are medium-large in size. The size of a Vizsla can vary between 51 cm and 66 cm, and its weight between 18 kg and 27 kg.

On the other hand, the German Shepherd can measure between 55 cm and 67 cm and have a weight that varies between 34 kg and 44 kg. Therefore, the Vizsla German Shepherd Mix will have an average size depending on its parents’ dominant qualities.

The Vizsla German Shepherd Mix is ​​a strong animal with a muscular body, a broad chest, long limbs, a straight tail, large ears, and a wide, wedge-shaped head.

The Vizsla German Shepherd Mix has a personality that any dog ​​owner wishes their pet had. This canine is characterized by being very affectionate, friendly, and mostly faithful to its owners and members of its human family.

In fact, it can also get along with other people, children, and animals. However, it is necessary to train them from a young age so that they learn to socialize correctly and do not have problems in the future.

It has well-developed instincts that allow them to be excellent hunting dogs like Vizslas. Besides, this breed has great abilities to carry out any other activity, which is why they are considered excellent working dogs. This canine can not only perform in hunting but is also skilled at being a guardian, herding, police, search and rescue, military or therapy canine.

The Vizsla German Shepherd Mix is ​​a canine with a protective instinct when it senses that its human family is in danger. However, it is essential to clarify that they are not aggressive dogs. They are easy to train and are willing to satisfy you by obeying you all the time.

The coat of a German Shepherd is dense and tends to shed constantly. That is why it is advisable to brush it daily, although it will be enough 3 or 4 times a week if you do not have enough time.

The Vizsla German Shepherd Mix should only be bathed when necessary, as it is not a dog that gets dirty quickly. Also, if it is cleaned regularly, its coat will be adversely affected.

It is important to train this canine every day through exercises, walks, games, or any other physical activity. The reason for that is because, as we have said before, this breed is characterized by having a high physical level and excels in activities as a guard, hunter, Shepherd, police, military, search and rescue or therapy dog.

In the same way, along with its exercise routine, you must provide it with a balanced diet to keep it healthy and fit.