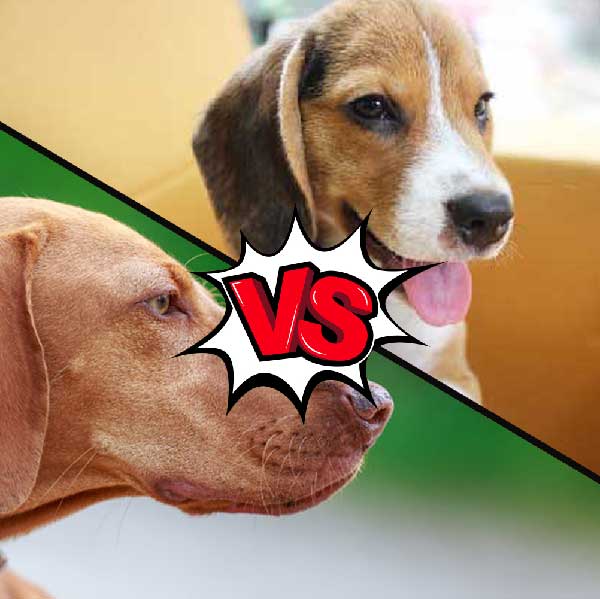 Dogs of different breeds can have quite remarkable differences. The size, personality, behavior, level of physical activity, and appearance are just some of the aspects that characterize these animals.

Among the great variety of dog breeds that exist, we will talk about two of them that are usually interesting for many families due to the characteristics they present. The Vizsla and the Beagle are breeds that we can recognize with the naked eye since there are quite remarkable differentiating characteristics.

Vizslas are dogs that have a graceful appearance and are characterized mostly by their hunting skills. They have a large size and a loving and sensitive personality. On the other hand, Beagles are small and energetic. They are known for their curiosity about things. These canines love to have fun and be happy.

Next, you will be able to know the most important differences that exist between these two races:

On the one hand, Vizslas are dogs of Hungarian origin. These animals come from hunting dogs that belonged to the Magyar tribe. In the 10th century, the breed was adopted by Hungarian royalty. A significant event occurred after the First World War when the Vizsla was on the verge of extinction, but thanks to the efforts of lovers of these animals, it managed to prevail.

The history of the Beagles is a little better known around the world. It is thought that its origin comes from ancient hunting dogs of Greece. The modern Beagle breed we know today was firmly established thanks to the Beagles kennel based by the Reverend Phillip Honeywood in Essex in the 1830s. In 1840, the Beagles were exported to the United States. Over time, these canines began to be exhibited in different shows, but with the arrival of the First World War, all were canceled. After the war, the breed lost popularity until a group of breeders managed to make it popular again at the beginning of World War II.

Vizslas are characterized by being large when they reach their maximum development, which is when they are adults. Their full size will depend on their gender, diet and general lifestyle.

Male Vizslas measure from 56 cm to 66 cm while females between 51 cm to 61 cm. It should be noted that the average size of males is 61 cm and that of females is 56 cm. The average weight of a male of this breed is 23.5 kg, but it can vary between 20 kg to 27 kg. In the case of female Vizslas, their average weight is 21.5 kg, but depending on their characteristics, it can vary between 18 kg and 25 kg.

These canines have light-colored eyes when they are born, but as they grow, they change to a brown (or amber) color that is camouflaged with the color of their fur, which is gold-oxide. Despite their large size, they are characterized by being thin and stand out for their long, silky and floppy ears. Like its eyes, its nose is camouflaged with its fur by presenting a reddish color.

As for Beagle dogs, one of the most differentiating characteristics with respect to Vizslas is their size. They are a small and compact breed that has a height that varies between 36 cm and 41 cm in the case of males, while females can measure between 33 cm and 38 cm. The average size of a male of this breed is 38.5 cm while that of the female Beagles is 35.5 cm. The average weight of a male Beagle is 10.5 kg, but it can vary in a range between 10 kg and 11 kg while the average one of the female Beagle is 9.5 kg taking into account that there are some that can weigh between 9 kg and 10 kg.

These canines feature an elongated head with large, floppy ears. They have a straight back and a deep chest. Their body is muscular, and they have well-proportioned dimensions. They are very versatile in hunting activities. There are many colored Beagles, and most of them are characterized by having tricolor patterns.

Vizsla vs Beagle: Personality and Behavior

Vizslas’ personality stands out above many other dog breeds, which is why they are considered excellent pets for families. They are very loving and friendly animals with the members of their human family, especially with their owners.

On many occasions, they can become shy with acquaintances and strangers, but they only need a moment to adapt to them and feel more confident. Vizslas can even get along with other animals, including cats.

Its high level of physical activity characterizes this breed, so they need to exercise all the time. For that reason, Vizslas can become destructive if their owners leave them alone at home since they do not like to be confined in one place. In fact, if they spend many hours alone, they can become anxious, which would negatively affect their health.

The Beagles’ personality has certain similarities to that of the Vizslas. They are very cheerful, active and curious dogs that need to receive love from their owners and members of their human family. Like Vizslas, they can become destructive and nervous if left alone in the house.

They love to play and have fun with people, especially children and other animals. Doing hunting activities or any other physical exercise is something that they enjoy to the fullest. They are intelligent and teachable so they can be easily trained to obey any command and avoid inappropriate behavior.

Vizslas can live between 12 and 15 years. However, everything will depend on the care that their owner gives them. A good diet, exercise routine and care will allow the animal to live longer.

The life expectancy of Beagle dogs is between 10 and 15 years, but as with any other pet, it could be shorter or longer depending on the care provided by its owner.