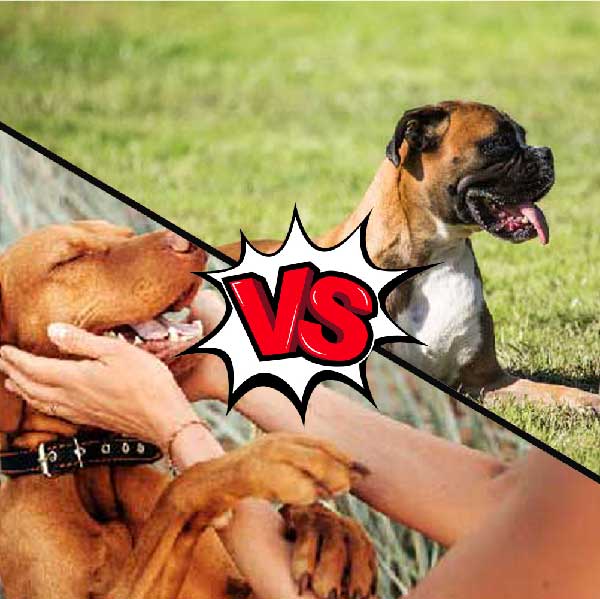 Pets are like people. When a person has a dog, cat, bird, or any other pet for a long time, strong bonds of affection and love are created. On many occasions, an animal’s owner tends to give more importance to it than to a human being.

Dogs are the pets that most reside in the homes of the world’s families. They are loyal and loving animals with their owners. There is a great variety of dog breeds that have different characteristics and qualities that differentiate them.

Two interesting and well-known breeds that we will talk about next are the Vizsla and the Boxer.

The Vizsla is a canine known throughout the world, especially for its abilities during hunting activities. These dogs are used as companions for hunters. These dogs stand out for their high level of physical activity and the exercises they must perform since they are very active and energetic animals. They have a loving and friendly personality that allows them to get along with people and animals.

The Boxer is very similar to the Vizsla in several respects. These dogs need a lot of exercises to be in shape. It is also important to note that they are dogs very attached to their owners, so they do not tolerate being left alone. The Boxer is usually a silent animal, so it does not bark frequently. This animal is considered one of the best-known breeds of the molossus type.

The Vizslas are known to have their origin in Hungary. These canines were used by the Magyar tribes as hunting dogs. This breed remained healthy during that time until they had an unfortunate episode after the First and Second World Wars.

The Vizslas were almost extinct, but thanks to a group of breeders who love these dogs, the breed was successfully recovered. In 1936, it began to be recognized by the Fédération Cynologique Internationale as the Hungarian short-haired pointer.

The Boxer originated in the 19th century in Munich, Germany. These dogs are said to be descendants of the Bullenbeisser breed, along with the mix of others. The Bullenbeisser was used mainly for hunting activities in which they had to corner and hold their prey. The American Kennel Club recognized this breed in 1904. After World War I, the Boxer was imported to the United States, and it became popular during the 1940s.

Vizslas are one of the most popular large dog breeds in the world. The size of this type of canine depends exclusively on its genetics, food, and quality of life. Females can measure between 51 cm and 61 cm, while males between 56 cm and 66 cm. Similarly, a female Vizsla’s weight is between 18 kg and 25 kg while that of a male Vizsla between 20 kg and 27 kg.

The Vizsla dog breed is characterized by its large size and muscular, slim, and well-proportioned body. It has a thick head, floppy ears, and a usually shorter muzzle than its skull. The coat of this beautiful dog is short and of a golden-oxide color.

When they are born, they have light eyes (usually blue or gray), but change color (brown or amber) as they grow. The nose of this canine is reddish and is camouflaged with its fur.

The Boxer dog can be similar in size to the Vizsla. This breed’s females usually have a height ranging between 53 cm and 61 cm, while males between 56 cm and 63 cm. The weight of a female Boxer ranges between 24 kg and 29 kg, while that of a male varies between 27 kg and 32 kg. As with any pet, the maximum size that it can reach will depend on the care provided by its owner.

This dog is characterized by having a robust and muscular body. It has a strong and heavy head along with a powerful jaw. In addition, the Boxer has floppy ears and a small muzzle. The coat of this canine is short and smooth and is usually brown, black, white, or even with brindle patterns.

Vizsla vs Boxer: Personality and Behavior

We already know that Vizslas are active, energetic dogs that love to run and jump outdoors. They are specialists during hunting activities due to their incredible abilities. These canines love to learn every day and satisfy their owners.

They are affectionate and friendly with anyone, regardless of whether it is a neighbor or a stranger. Their beautiful personalities with children make them excellent pets for families.

Boxers are also characterized by being active and requiring a lot of exercises. They love to play with children, although they must be supervised to avoid any danger because this breed has great physical strength.

They are friendly with people but tend to be more affectionate with their owners. It is not advisable to leave this dog alone for a long time as it can become destructive due to boredom and loneliness.

We have to emphasize that although the Boxer can get along well with other animals, there are certain situations where this dog could attack other dogs and even cats. For that reason, it is crucial to supervise them all the time to avoid any problems. Boxers do not have a reputation as barking dogs. On the contrary, they use grunting as a communication way.

Vizslas usually have a life expectancy of between 12 and 15 years, but they could live up to 20 years. On the other hand, Boxers can live between 10 and 12 years. We must bear in mind that the time that our dog can live will depend on the care we provide.