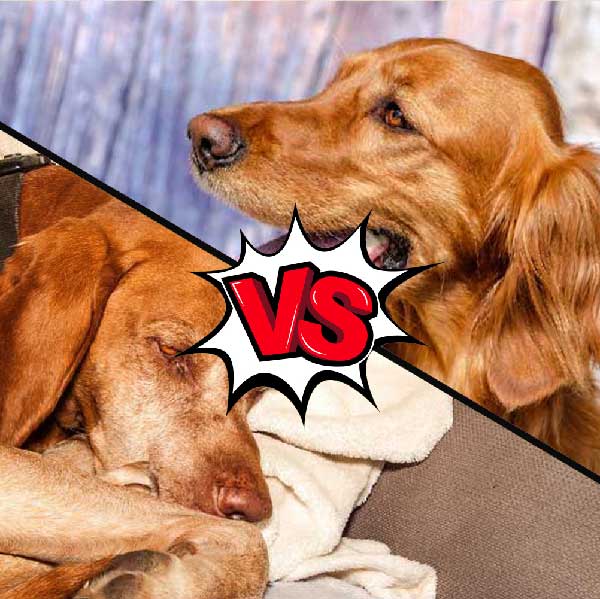 Pets are part of most families in the world. Having a cat, bird, or dog is comforting for each family member since it is a life companion. There are many species that are considered as pets depending on people’s tastes, but the most common and loyal ones are dogs.

Dogs are wonderful pets that coexist with humans in a harmonious way. They are loyal beings who love to be with their loved ones. Two of the dog breeds that perfectly meet these characteristics are the Vizsla and the Irish Setter.

The Vizsla is known especially for its hunting skills and for being excellent hunting companions. They present a high level of physical activity showing great performance in any activity. They are intelligent, teachable and require exercise every day to be in shape. Vizslas are considered excellent pets as they are usually affectionate and friendly with members of their human family, strangers, and other animals.

On the other hand, the Irish Setter is considered one of the most beautiful and glamorous dogs in the world due to its beautiful coat and slender body. Generally, these canines have been used over the years as hunting dogs, but today, we can also find them in dog shows due to their appearance. They are usually playful, mischievous and friendly with their people, especially with children.

The Vizsla is characterized by having its origin in Hungary around the 10th century. These dogs come from the Magyar tribe, which used them as hunting dogs at that time. Many theories confirm that this breed was on the verge of extinction after the First World War, in which only 12 Vizslas remained.

However, at that time, there were many groups that adored this breed for which they began to raise them properly. That allowed these dogs to be saved and survive to this day.

The Irish Setter originated in the early 18th century in Ireland. They were used by shotgun hunters to find downed prey. At that time, there was a white and red Irish Setter who was responsible, thanks to a series of selection processes, for the emergence of the Irish Setter.

The popularity of the Irish Setter began to increase while that of the Red and White Setter decreased. This breed was exported for the first time to the United States at the end of the 19th century, which allowed it to be known throughout the rest of the continents.

It is a dog that stands out for its physical characteristics. Its body is muscular, slim and well-proportioned with a short, hard, golden-oxide coat. The eyes of this canine have a brown or amber color that matches its fur. This dog has a reddish nose, floppy ears, a short muzzle, and a wide, domed skull.

The Irish Setter is usually slightly larger than the Vizsla. The male of this breed measures between 58 cm and 67 cm, while the female between 55 cm and 62 cm. The average weight of this animal (male and female) varies between 25 kg and 34 kg. It should be noted that its maximum development and size will depend on the diet and lifestyle provided by its owners.

This beautiful dog is characterized by having an elegant and slender body. However, its greatest physical attribute is its beautiful and silky reddish coat. The head of the Irish Setter is elongated, and its skull is oval. The nose is black, and its muzzle is moderately deep. The eyes of this canine are usually medium-sized and dark brown in color.

Many families purchase a Vizsla for its beautiful personality. They are characterized by being affectionate and friendly with their owners, members of their human family, neighbors and other animals. They are very sensitive to loneliness, so if their owner leaves them alone for a long time, they can become anxious.

Similarly, they hate boredom, so they need to spend a large part of their day outside doing any exercise or physical activity. That is because they are dogs that have a high level of physical activity. In addition, they have excellent hunting skills that allow them to be an ideal companion for hunters.

The Irish Setter is a dog with a playful and fun attitude. They are intelligent, curious and mischievous on many occasions. They are friendly with people, especially with children and other pets, so it is considered an excellent pet for families. However, they need to be trained in this aspect from puppies. These canines do not present any character and behavior problems since if their owner prepares them properly, they can become very well-mannered animals.

Like the Vizslas, they are known for their excellent hunting skills. They require a lot of physical activity every day. If their owner keeps them confined inside the house, they can become destructive since they will try to release all the energy they have accumulated.

The life expectancy of both dogs (Vizsla and Irish Setter) is usually the same with a proper lifestyle. Generally, these canines can live between 12 and 15 years. However, depending on the diet, care and quality of life in general provided by their owners, they can live more than 20 years.