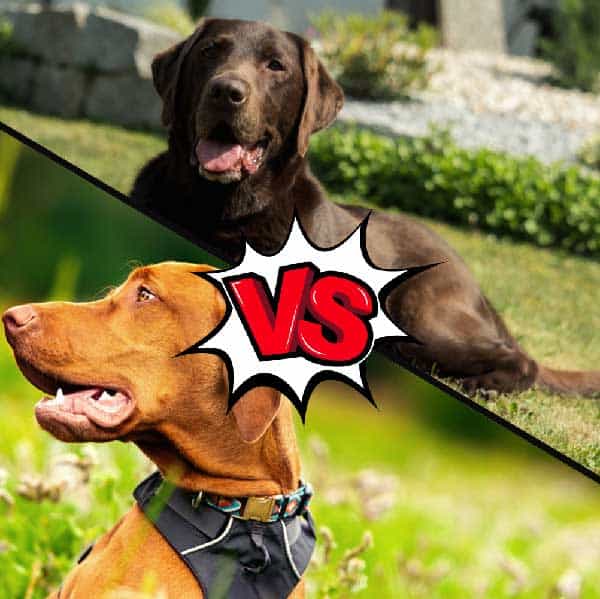 Most people acquire a pet to feel accompanied all the time at home. Many decide to have a cat, bird, snake, hamster, or dog as a pet, and we know that each of these animals must be cared for and fed differently.

It is well known that the most popular pets are dogs due to the love and loyalty they offer to their owners. Two amazing dog breeds known and loved around the world are the Vizsla and the Labrador Retriever.

Vizslas are active, energetic and playful animals that need exercise and any other physical activity during the day. In fact, they are canines known for their hunting skills and for having a high level of physical activity.

These dogs have a loving and sensitive personality, so they need to be with their owners or members of their human family most of the time. Vizslas cannot be left alone for a long time as they can feel anxious and sad, which is negative for their health.

The Labrador Retriever is especially characterized by its personality. They are intelligent dogs that have a high level of skill to learn anything quickly. They are considered excellent family companions. The Labrador Retriever is a docile, affectionate and caring dog that needs to spend a lot of time with its loved ones either during training or doing any other activity.

The Vizslas have their origin in Hungary. These canines come from the Magyar tribe, which used them as hunting dogs. This breed of dogs had different unfortunate stages throughout history, including the First and Second World War, during which they were on the verge of extinction. Fortunately, a group of Vizslas fans managed to maintain this breed to this day. It should be noted that during that time, only 12 canines of this type remained.

The Fédération Cynologique Internationale recognizes that the Labrador Retriever originates from Great Britain. However, the beginning of this animal’s history dates back to the early 19th century in the Canadian city of Saint John.

One of the most distinctive features of the Vizsla is its size. They are dogs with a medium-large size that can vary depending on their gender, diet and care. Male Vizslas are between 56 cm and 66 cm tall, while females between 51 cm and 61 cm. The weight of a male of this breed varies between 20 kg and 27 kg while that of the female between 18 kg and 25 kg.

These canines are slim, muscular and well-proportioned in relation to the other parts of their body. The skull of a Vizsla is wide, its muzzle is short, and it has floppy ears. This animal’s fur is short and hard and has a golden-oxide color that combines perfectly with the color of its eyes, which is usually brown or amber. Likewise, the reddish color of its nose is camouflaged with the rest of its body.

The Labrador Retriever has a robust and compact body that is characterized by being longer than tall. This dog’s legs are muscular, with a broad head, large eyes and brown color, a thick tail, and a wide and elongated muzzle.

It has floppy ears and a dense, short, undulated coat that is usually black, yellow (or reddish) or chocolate. On certain occasions, the chest of this canine may have white spots.

Vizsla vs Labrador: Personality and Behavior

One of the most distinctive aspects of Vizslas is their personality. They tend to be very loving and friendly animals to their owners, members of their human family, friends and acquaintances of their loved ones, strangers, and even other animals.

However, for the latter, socialization training is necessary for the Vizsla to get along with them. These dogs need to be with their owners, so they don’t feel alone. In fact, if a Vizsla is left alone for a long time, they can begin to exhibit destructive behavior.

In addition, Vizslas need daily exercise as they are dogs with a high physical activity level. On many occasions, they are used during hunting activities. They love to play, exercise, run, and go for walks with their owners and members of their human family.

A Labrador Retriever is considered an excellent family dog ​​with an active life and is willing to provide training and exercise every day. They are very intelligent dogs that love to carry out the activities imposed by their owners. Like the Vizslas, these canines need to exercise at least 1 or 2 times a day since if they remain at home for a long time, they will acquire a destructive behavior in order to release all their accumulated energy.

It should be noted that the Labrador Retriever is very friendly, loyal and affectionate. On many occasions, they are used as rescue, therapy, or assistance dogs. These dogs tend to suffer from separation anxiety, so they cannot be left alone for long.

Vizslas usually have a life expectancy of between 12 and 15 years. In the case of a Labrador Retriever, the years it can live vary between 10 and 12 years. We have to bear in mind that both breeds can live for a longer (or shorter) time, depending on the lifestyle provided by their owner.