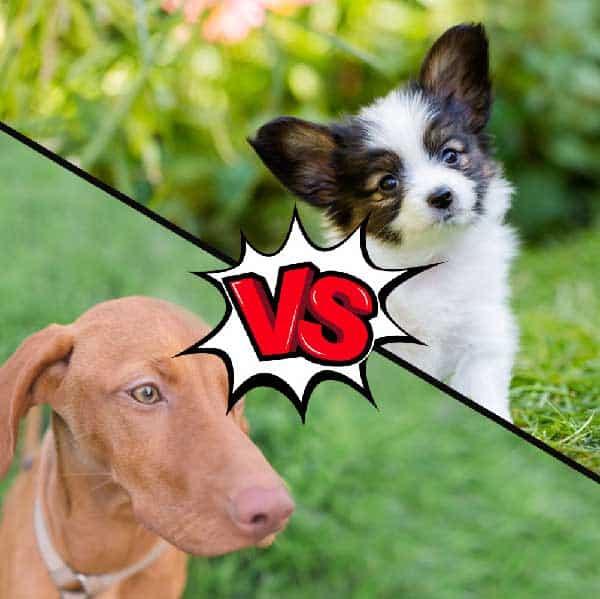 The variety of pets that exist around the world is wide. Many families love to have animals as family members for different reasons whether it is to be accompanied, to feel the love from someone non-human, to have fun, etc.

Despite the great variety of animals considered as pets (dogs, cats, snakes, birds, etc.), it is essential to bear in mind that the most frequent in the world’s families are dogs. We know that the number of canine breeds is also high, but below, we are going to talk about two of them: The Vizsla and the Papillon.

The Vizsla is a dog that is characterized by its different abilities, especially in hunting. They are animals that present a high level of physical activity and need to exercise daily.

In addition to being very active and energetic, they tend to be loving and friendly to all the people and animals around them. One of the peculiarities of this breed is that it suffers from separation anxiety which can be negative for certain families.

Papillon is one of the most elegant dogs in the world. Generally, this type of dog is happy, lively and energetic. They like to be together with their owners and sit on their lap. This breed gets along well with both cats and other types of canines.

These dogs are easy to take care of in terms of their diet and exercise since they do not require as much attention in this regard as in the case of the Vizslas.

The origin of Vizsla dogs dates back to the 10th century in Hungary. These canines are from the Magyar tribes which used this breed in hunting activities. Various theories confirm that the Vizsla was close to extinction after the terrible events of the First World War. However, they managed to be preserved thanks to a group of breeders who love this animal.

Many people determined that the Papillon dog is a descendant of the Miniature Spaniel which appeared in paintings created by Tiziano Vicelli in the 16th century. At the time, they were considered royal dogs as most of the royal families in Europe included them in their paintings.

In the 19th century, the morphology of this canine changed and they used to have large and floppy ears, but over time, they evolved until they had stiffer ears (as today). This breed was officially recognized in 1935.

This dog stands out for its large, muscular, slim and well-proportioned body which has a golden-oxide coat that highlights the color of its eyes (brown or amber). In addition, the head of this animal is broad; its muzzle is not elongated; its back is straight and muscular. Notably, it has floppy ears and a reddish nose.

Unlike the Vizsla, the Papillon dog is small. The average size of both the male and the female of this breed varies between 20 cm and 28 cm while the average weight between 3 kg and 5 kg. Like any other dog, the size and development of this animal can be affected by its diet, care and lifestyle.

The Papillon is considered one of the most elegant dogs mainly due to its posture and its most distinctive attribute, its large butterfly-shaped ears. The coat of this small canine is long, silky, white and can have black, red, brown or sable spots. In addition, it also stands out for its furry tail.

Vizsla vs Papillon: Personality and Behavior

One of the most distinctive aspects of the Vizsla is its behavior and personality. These canines are usually active, playful and energetic, so they need to play, exercise or do any other physical activity during the day. They need to correctly be fed so that they can get the most out of their daily exercise routine.

Vizslas are affectionate and friendly to all people. However, it is important to note that depending on this canine’s personality, it may have greater difficulty getting along with strangers and other animals (this is easily solved with training).

These dogs should not be left alone as they suffer from separation anxiety which is harmful to their health. Similarly, if they stay indoors for a long time, they can become destructive.

A properly educated Papillon dog can be very intelligent and friendly to the people around it and other animals. They are characterized by being happy and playful canines that will always be animated, especially if they are together with their owners. They love to be petted and to sit on the lap of their loved ones.

They are excellent pets for families as they get along well with all members, especially children. Like Vizslas, they need to exercise as they hate being bored. However, it is crucial to consider that the exercise or game sessions should be shorter than those of the Vizslas.

An interesting fact about the Papillon is that despite being small in size, they are excellent watchers. That means they can alert their owners to any strange sounds or people near the house.

The life expectancy of both breeds is similar. Vizslas can live between 12 and 15 years while Papillon canines between 13 and 15 years. Both dogs could live to be 20 years or more depending on the good nutrition and care that their owners provide. In the opposite case, unfortunately, they will not be able to live even to 12 years.