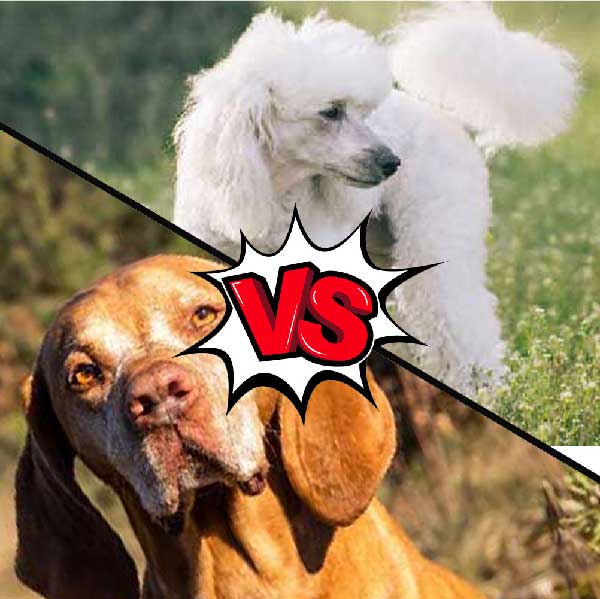 Dogs are extraordinary and beautiful animals that we can consider as friends. In the world, most families have a dog in their homes, and each of them is of a different breed. The reason for this is that each family has specific preferences, and they decide to choose a canine with characteristics that suit their lifestyle.

Two of the most interesting and popular breeds that we can highlight are the Vizsla and the Poodle. Both dogs have well-defined characteristics that allow them to be different from others.

The Vizsla is a dog known for its abilities during hunting activities. This canine is characterized by needing to exercise daily due to its high level of physical activity. In addition, the behavior and personality of these animals is something that people adore.

On the other hand, the Poodle is characterized by being an intelligent and teachable animal that can be easily trained. They are active and energetic canines that love to play and learn through training. Besides, they are known to be very loyal to their owners like the rest of the members of their human family.

The Vizsla is an ancient breed of dog whose origin dates back to the 10th century in Hungary. These canines are said to have been used by the Magyar tribe as hunters for rabbits and waterfowl. Throughout the years, this breed was able to survive different historical events. One of them was the First World War. At that time, there were only 12 dogs of this type left, but thanks to the lovers of these animals, they were able to continue subsisting until today.

According to various theories, the Poodle dog comes from Germany. Still, over the years, it spread to other European countries such as France (during the revolutionary wars), the United Kingdom, Spain, Portugal, and the Netherlands. In its beginnings, it was considered a hunting dog thanks to its intelligence and training capacity. In the 16th century, the Poodle was used to star in various circus acts due to its abilities and skills. Today, these canines are considered to be excellent pets.

Vizsla dogs, when they are adults, are usually large. The development of each dog depends on its diet, age and gender. The females of this breed have a height that varies between 51 cm and 61 cm while the males between 56 cm and 66 cm. The weight of the Vizslas varies depending on their diet. Females usually weigh between 18 kg and 25 kg while males between 20 kg and 27 kg.

These animals have an elegant appearance and usually have a muscular, lean and well-proportioned body. The short fur of this animal is of a golden-oxide color which combines with that of its eyes (brown or amber). Its nose is reddish in color and blends in with its fur. The Vizsla has long, floppy ears that allow it to have a developed sense of hearing during hunting activities.

Unlike the Vizsla, the Poodle usually has a similar size range for both the female and the male. It should be noted that there are 4 types of Poodles, and each one has a different size. The standard one measures between 45 cm and 60 cm; the medium one between 35 cm and 45 cm; the dwarf one between 28 cm and 35 cm and the toy one less than 28 cm. Obviously, the weight also depends on the type of Poodle. The standard one weighs approximately 22 kg; the medium is 12 kg; the dwarf one between 4 kg and 7 kg and the toy one between 2 kg and 3.5 kg.

The Poodle has a graceful and well-proportioned body featuring a long neck and a straight back. It has a prominent muzzle, small head and floppy ears. This canine is characterized by having a curly coat that can present colors such as black, white, brown, gray or apricot. It is possible also that there are Poodles with mixed colors depending on the genetics of their parents.

Vizsla vs Poodle: Personality and Behavior

The personality and behavior of a Vizsla is the quality by which families are interested in them. They are characterized by being friendly with all people and animals. No matter if it is a neighbor, an acquaintance of its owner, or a stranger, this animal will quickly adapt to their presence.

Vizslas love to do any exercise or physical activity together with their owners or members of their human family. They are very active and energetic animals that need to move always so as not to get bored. That means it is not a good idea for you as an owner to leave your Vizsla alone at home as it can become anxious when feeling lonely. In case that happens, they can become destructive as they will try to release all the energy they have. It is for that reason that they need to be outside the house during the day so that they can run and jump as much as they want.

Poodles are also known for being brilliant and having a good memory just like Vizslas. They are affectionate and playful with their owners or members of their human family. They need to be close to their loved ones and receive the same love that they give. Poodles are easy to train as they are willing to learn and satisfy their owners at all times.

On many occasions, Poodles tend to develop bad habits such as barking. That can occur at times when their owners leave them alone for a long time. In this respect, they are similar to Vizslas. It should be noted that these canines are friendly with all people and even with animals. However, the smallest type of Poodle can develop mild aggressive behaviors with strangers and other animals since they have the desire to protect their family.

The life expectancy of both the Vizsla and the Poodle is usually the same and varies between 12 and 15 years. However, that time can be extended to 20 years or more depending on the care and feeding that we provide to these pets.