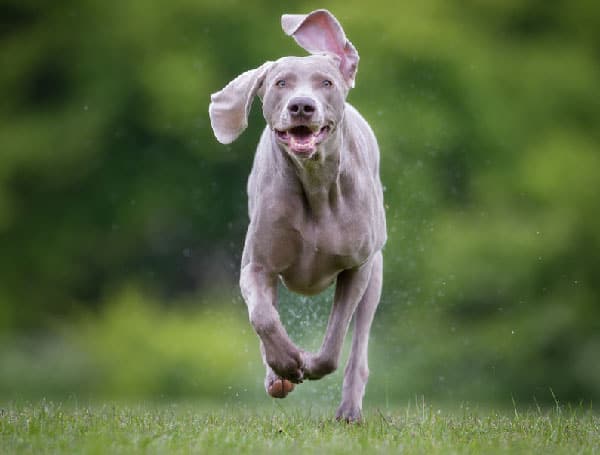 Pets are fun and act as a companion to individuals may it be cats, rabbits, or dogs. However, when it comes to dogs, there are varying breeds. Dogs are friendly, and they can get kept for hunting, security, and the usual company.

Therefore while getting a dog, it’s always essential to spot its characteristics to be able to keep it and also to satisfy your needs. In this article, I will provide information on the differences between vizsla and Weimaraner dog breeds.

Both the dogs have varying histories, but they both have noble roots.

The vizsla has its roots from Hungary, and it dates from 890A.D. vizsla became popular during the migration of some Hungarian tribes to the Carpathian Basin. These tribes brought with them the ancient vizsla breeds, which helped them to hunt birds by scent. Later the vizsla was used for hunting partridge, quail, and pheasant by the first king of Hungary.

The vizslas got bred with German and English pointers in the 1880s; however, the breed suffered massive loss during World War II, which led to almost extinct of the breed. Frank Tallman, who was an American breeder, imported vizsla in the a950s and 1960s, where the breed got recognized by America kennel club.

The Weimaraner breed traces its ancestry to the famous now extinct St Hubertus Brachen, which was a hunting breed dating in 650 AD. Henry VIII imported the breed in Germany back in 1530, and it got its name from the court of Weimar.

The Weimar nobles were famous for their avid sportsman and got used for hunting big game like wolves, deer, and bears. The weimers pointers were a mix of German shorthair pointer, English pointers, blue Great Dane, and bloodhounds, which creates the modern-day Weimaraner.

The dogs got brought from German to the US for breeding by Howard knight before World War II and were recognized in 1942 by the American kennel club. Weimaraners are also called silver ghosts, weims, or grey ghosts ideally because of their short silver-grey coat.

The vizsla breed is small-boned but has a long body. Its height ranges from fifty-six to sixty-one centimeters tall. The female vizsla weighs approximately 20- 29 Kg while male vizslas weigh 25-35 Kg.

The Weimaraner height ranges from sixty-four to sixty-nine centimeters. An average female Weimaraner weighs 25-35 kg while the male weighs 30-40 kg.

The vizsla coat is a cute golden rust color. The vizsla breed is self-colored which then insinuate that nose, footpads, eyes, eye rims, lips, and toenails blend with the coat color. Viszla can come with the wire-haired coat though this characteristic hasn’t been recognized by the American kennel club yet.

On the other hand, the Weimaraner bleed comes with three diverse colors that are blue, gray, and silver grey. The popularly known as the gray ghost are not self-colored; for example, you may find some breeds with a small white spot on the chest, which is not a fault.

Otherwise, its eyes may carry colors like blue-gray, amber, or gray, and they may not or may blend with the coat. The Weimaraner may come with a long-haired coat though the American kennel club hasn’t recognized this characteristic yet.

Vizsla breed has a brown nose, and it is brown-eyed. Their ears are long, but they somewhat set low on their head.

On the other hand, the Weimaraner has grey, amber or blue-gray eyes and a dark gray nose. When the Weimaraner is excited, their eyes dilate, and they turn black. They also have long ears that reach their cheeks and are set high on the head.

The vizsla is easy to groom; this is because their coat is not very sticky to make them clean during muddy days, brushing them twice a week is enough.

The Weimaraner is an active breed; therefore, they get muddy, but the dirt falls off from their coats, this is great considering that the dog frequently rolls around stinky things. This breed also shed, but it’s not tedious; they will need a brush once in a week due to their short coats.

However, both dogs will need a lot of grooming at an early age; this will lead to the development of good behavior. Yet as sensitive as they are with their feet regularly handle their paws and examine their ears and mouth. By doing this, you will be out of regular visits to the groomer or vet, and that means they will grow quickly and healthy.

Both breeds are active and charming, but they have different health conditions that attack them now and then not forgetting they have varying lifespan.

The vizsla has a life span of ten to fourteen years. However, like any other breeds, the vizsla breed is inclined to health conditions such as hypothyroidism, epilepsy, and hip dysplasia.

The Weimaraner breed has a lifespan of eleven to thirteen years. The Weimaraner, too, are exposed to health conditions such as elbow and dysplasia, on Willebrand’s and hypothyroidism, which are inherited blood disorder.

Vizsla breed is known for its attachments to humans. This breed is very affectionate and gentle; they also have high intelligence and have a strong will to please their owners; hence they are great companions and also have a great desire to be around people. Vizslas are categorized as gun dogs by the United Kingdom kennel club. They are an active breed, and they are very athletic. These dogs are intelligent and very sensitive; therefore, if they get bored, they are destructive and shy.

However, if they get early socialization, a lot of attention, and training, they benefit greatly. Vizslas are active and energetic; therefore, they require a lot of exercise. Their owners keep them involved at least two and a half hours a day with activities like games, running, or walking.

Vizsla breed will need a spacious place like a garden since they do not do well in a confiscated area. Due to the affection to people, the vizsla breed performs well in therapy work and canine sports. During the training of this breed, they work on positive reinforcements such as praise, treats, or play.

On the other hand, the Weimaraner breed is attentive, friendly, and obedient; therefore, they are excellent watchdogs and companions. This breed requires early training and socialization since they are shy and aggressive.

The breed is known to get very naughty and mischievous, especially when it’s left alone, it can chew, chase or bark at cats. This breed temperament also is significantly impacted by its training and classical training; therefore, socialization with other animals and daycare, different environments, and people will benefit their life.

This breed is indoors or a house dog; thus, small dwellings or backyard life is not favorable for them. In a day, the Weimaraner needs a lot of exercises since they are sport dogs. They find it fun playing games such as playing fetch, and they do great a company for a hike or long jogs.

However, during the early stages, they open doors, jump over the fences or dig holes in the garden. The bleed is an independent thinker, intelligent, and smart; therefore, training is not a hard task.

Just a sneak peek, both dogs are known for chewing, you can give vizslas paper toys to eat that will save your shoes from getting chewed. Weimaraner is known for being a sloppy and loose lip; therefore, when they drink water clean-up spillage and train them to eat from a specific place; thus, your carpet and rugs will be safe.

Individuals get pets generally to keep them company and occupied when they are free or bored; therefore, here is the difference between the two breeds at home.

Vizsla breed is excellent with big children and not toddlers. Because the breed is energetic; hence it will be too much for kids who are younger than six years. The vizsla is a calm dog and fits well in a multi-pet household; thus, they relate well with cats and other dogs, especially those that they got raised together.

Weimaraners breed is a friendly, gentle, and obedient dog; therefore, it’s a great companion to toddlers who are acquainted with dogs. Weimaraners are boisterous and energetic with toddlers and may chase kids who are learning to run or who are just up their feet. However, this breed is not great with small dogs or cats; therefore, a household with multi-pets is not suitable for this breed.

Both breeds are hunters and sporty; that is their temperament, and one can hardly change that; therefore creatures such as rabbits, birds, or gerbils are prey than family according to these breeds.

However, both breeds are great and very good for a companion-the above article I have discussed the differences between the vizsla and Weimaraner’s dog breeds. I hope the article was helpful and educational. It’s my hope also you have found the information you needed.