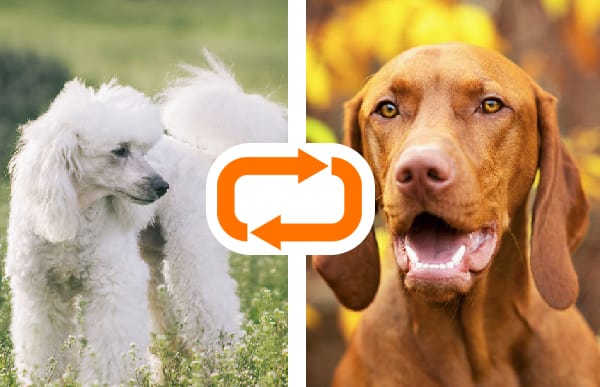 The crossbreed is a practice carried out by many breeders around the world in order to originate a canine that has features of its parents. There are a wide variety of mixed breeds around the globe, each presenting different physical and emotional characteristics.

Two of the most popular breeds worldwide are the Vizsla and the Poodle. People might think that it is not possible to mix both species due to their characteristics. We have to bear in mind that there are several types of Poodles in terms of size, so we could consider that a cross with a Vizsla is something utopian. However, it is possible to do so.

A Vizsla dog is considered not only an excellent pet but also a good companion for hunters due to the skills it presents in this activity. It is a canine with a high level of physical activity that requires exercise every day to stay healthy and fit.

These dogs have a friendly and loving personality, especially with their owners and their human family members. One of the negative points of this breed is the separation anxiety they feel when left alone for many hours.

On the other hand, a Poodle is characterized by its elegance and intelligence. In fact, it is one of the five smartest dogs in the world. A peculiarity of this breed is that there are 4 varieties that differ according to their size.

It is very easy to recognize a canine of this type thanks to its curly and kinky hair. These dogs are easy to train, but they need to be the center of attention on many occasions. That can be negative since if you don’t pay enough attention to it, then it could develop bad habits that can annoy the people around it.

Next, we will talk a little about the mix between a Vizsla and a Poodle.

As we have mentioned previously, there are 4 varieties of poodles, which are:

Any of these varieties can be mixed with a Vizsla, although many people believe that it is not possible. That is, if we cross a Dwarf Poodle with a Vizsla, we will have a small Vizslapoo. The same will happen with the other varieties.

We have previously mentioned that Vizslas can be mixed with any variety of Poodles, so that will define the size of the Vizslapoo. Therefore, the size of this canine can vary between 24 cm and 60 cm approximately.

The coat of a Vizslapoo will depend on the dominant genetic qualities of the parents. That means that some dogs of this breed can have a dense coat while others have a slightly smoother one.

Importantly, the Vizslapoo can have curly and kinky fur more often. The predominant color that this breed can present is gold-oxide, although it can also be a little lighter when mixed with white.

These dogs have a light, slim and muscular body with a wide skull and a well-proportioned neck with respect to the rest of their body. The color of the eyes maintains its parents’ characteristics, presenting dark tones between brown and amber.

Generally, both Vizslas and Poodles are very intelligent dogs. A Vizslapoo has high intelligence, which allows anyone to train them easily. This breed is characterized by being active, energetic, playful, obedient and affectionate, making it an excellent pet for families.

They love to have fun doing any physical activity (playing, running, jumping, walking, etc.), together with their owners or members of their human family.

The Vizslapoo is an animal that can present the personality of a Vizsla or that of a Poodle. Some of them may be sensitive as they may feel sad and anxious if left alone for a long time, while others need to receive attention and feel important within the family group. These characteristics will depend on the dominant qualities of the parents.

We have said that these dogs are very active and require exercise in two daily sessions of 30 min or 1 hour each (depending on your pet’s development and age). They love to swim, walk, run, and play with their loved ones, especially children.

Like a Poodle, the Vizslapoo can develop bad habits such as barking or making any other annoying sounds. The reason for this is because these canines do not feel that their owners pay enough attention to them. Also, if the predominant personality of a Vizslapoo is that of a Poodle, then it may be difficult for it to get along with other people.

Vizslas do not require as much attention, but if it is a Vizslapoo, then the situation changes. This mixed breed of dog tends to have a curly coat, which can become tangled easily.

That is why it is advisable to brush it more than 3 times a week since they are canines that do a lot of exercises, so it is more common for their fur to get tangled. A dog groomer can be a good option in these cases.

Most dogs smell bad after a certain amount of time. That is not the case with a Vizslapoo. This breed of dog maintains this characteristic of the Vizslas, so it should only be bathed when necessary.

This dog needs to be stimulated mentally and physically, so it is essential to establish a daily exercise routine.

The most suitable place to live with your Vizslapoo will depend on Poodle’s type chosen for the crossing. If mixing the two breeds resulted in a small Vizslapoo, it will easily adapt to big cities’ apartment. However, if the result was a medium or large Vizslapoo, it should live in open spaces such as a field or a house with a spacious backyard.