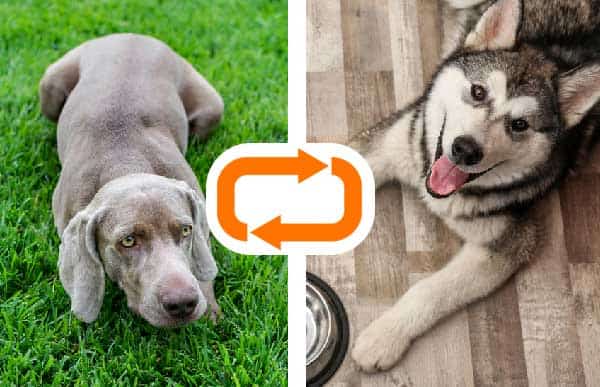 In the world, there are people who live alone in their homes while there are others who do so with numerous family members. Regardless of the case, any of them feel the need to have a non-human partner not only to feel accompanied but also to have someone to care for and spend a lot of time having fun.

For that reason, we can see that a lot of people and families adopt or buy different animals to have as pets, whether they are dogs, cats, birds, snakes or rodents. However, a large percentage of them prefer dogs because of their loyalty and their coexistence with a human being.

It is important to note that there are not only traditional breeds, but there are also many of them created through mixtures. One of them is made up of two interesting breeds of dogs: The Weimaraner and the Husky.

The Weimaraner dog is one of the easiest breeds to identify thanks to its main characteristic: its silver-gray coat. This canine is known as the “Gray Ghost” due to its appearance.

This breed has a high level of physical activity and is noted for its need to exercise daily. Besides, if we talk about their personality, we have to say that they are very friendly and affectionate canines that need to be accompanied by their owners or family members not to feel alone.

The Husky makes an excellent companion dog. It is one of the oldest dogs globally since its origin dates back more than 3,000 years.

This dog’s physical appearance resembles that of a wolf, which makes it a very beautiful animal with a unique coat. These canines are characterized by being affectionate, playful, and friendly with the members of their family nucleus.

This breed of dog originated as a result of the mix between a Weimaraner and a Husky. The name of this beautiful canine is “Weimarsky.” It is characterized not only by its large size but also by its personality.

The combination of the dominant characteristics of its parents creates a beautiful dog with an attractive appearance. It possesses a furry coat like that of a Husky or other physical and emotional traits that belong to both parents.

The first thing to note is the large size of this mixed breed that has been inherited from the Weimaraner and Husky. The Weimaraner is a medium-large canine that usually measures between 56 cm and 69 cm and weighs between 23 kg and 32 kg.

On the other hand, the Husky is also a medium-large dog that measures between 50 cm and 60 cm and weighs between 16 kg and 27 kg. As we have seen, the Weimaraner is a bit larger.

A Weimarsky will also have a medium-large size, which will be an average of its parents. Obviously, its total growth and development will depend on its gender, diet and quality of life that its owners have provided.

The Weimarsky is a canine with a strong, muscular body with large bones. It may present some traits of a wolf but not as much as in the case of a Husky. This breed has a wide skull, floppy ears and round eyes whose color will depend on the characteristics inherited from its parents.

They can be brown, amber, or sky blue. Some Huskies can have heterochromia (a mutation that gives each eye a different color), so don’t be surprised if you see a Weimarsky with this characteristic.

The fur of this canine will depend on the characteristics inherited from its parents. It can have a short coat like the Weimaraner and a hairier one like the Husky. However, it is most often the second one in this mixed breed. The colors that this canine can have are white, black, black and tan, silver-gray, black and white, gray and white, red and white.

Regarding the personality of a Weimarsky, we can say that this dog is very outgoing, friendly, affectionate, playful and enthusiastic. It can get along very well with its owners and members of its human family, but its relationship with strangers will depend on the characteristics inherited from its parents.

That’s because the Husky tends to be more aloof with people it doesn’t know, while It is easier for the Weimaraner to trust them. In any case, it is best to provide a Weimarsky with socialization training from puppyhood.

We also have to emphasize that this mixed breed is very active and needs to do some physical activity every day (running, jumping, playing, exercising, etc.).

They are easily trainable and teachable, so you shouldn’t have any problem in this regard. However, it must be considered that these dogs do not tend to tire easily, which can be a problem for certain families who do not have time to attend to them for most of the day.

As we have said before, the Weimarsky can inherit the coat of both a Weimaraner and a Husky, although that of the second one is usually more common. In these cases, a Weimarsky’s fur must be brushed daily, paying close attention to the times of the year where it tends to shed. In addition, it will not need to be bathed as often as it will only be necessary when it gets dirty or every month and a half.

The Weimarsky needs a high dose of daily exercise due to its high level of physical activity. They love to do any type of training, so it is essential that you provide them with a varied routine so that they do not get bored.

Along with this exercise routine, you should make sure to offer a balanced diet that provides enough energy. It is important to note that the food you give this breed of dog must be of high quality to prevent it from gaining weight or, failing that, causing damage to its health.

Keep in mind that like any other dog, it should be taken to the vet a couple of times a year so that he or she can check it properly and thus be able to keep track of the quality of life that you are offering to your canine. In case of signs of any disease, the vet will also be in charge of giving you the corresponding indications.