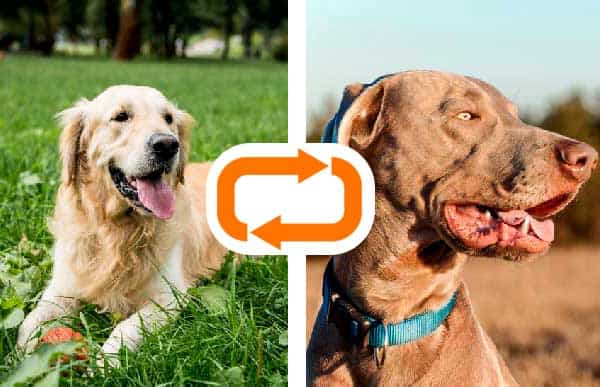 There are many breeds of dogs around the world. Most of them have arisen thanks to crosses between different species throughout history. However, people’s curiosity has led them to create many others through mixes between existing dog breeds. The objective of this has clearly been to obtain canines with particular characteristics of their parents.

Two interesting breeds of dogs known throughout the world due to their physical characteristics and personality are the Weimaraner and the Labrador Retriever.

Both canines stand out for their particular qualities, but the most significant difference between them is their physical appearance. Weimaraners can be used as hunting dogs, while a Labrador is used as a rescue, assistance, or therapy dog.

The Weimaraner is a canine known as the “Gray Ghost” because its most striking feature is its beautiful silver-gray coat. This dog stands out for its hunting skills and its high level of physical activity.

The Weimaraner presents a gentle and patient character as well as a loving and friendly personality towards members of its human family. They can get along with any strange person or animal, but it will need prior socialization training.

On the other hand, the Labrador is especially characterized by its interesting personality. It is one of the most popular dog breeds in the world. This canine is good-natured, docile, patient, and friendly to everyone around it.

They are very intelligent as they have an extraordinary ability to learn anything quickly. The Labrador is a dog that needs to spend a lot of time together with its loved ones, especially its owners.

This breed of dogs originated through the mix between a Weimaraner and a Labrador Retriever in the United States. It is considered a rare cross, but at the same time, it is one of the most sought after due to its beauty. Many people give the name “Silver Labradors” to these dogs.

The Weimaraner Lab Mix is ​​a dog that stands out for its beautiful coat, which can be brown, black, yellow or gray, depending on its parents’ dominant characteristics. In addition, they have a very active, energetic and affectionate personality, so they will surely be excellent companions for their owners and members of their human family.

The most significant difference between a Weimaraner and a Labrador is their physical appearance.

Obviously, the Weimaraner Lab Mix size will depend on the characteristics of its parents as well as other factors such as diet, gender and quality of life. However, this mixed breed’s size will be an average of that of a Weimaraner and a Labrador.

This canine’s most outstanding physical aspect is its beautiful shiny coat, which is short and one layer. It usually has different colors such as yellow, black or brown. However, the most common is silver with brown tones.

Generally, the Weimaraner Lab Mix has a head similar to that of a Weimaraner, while its limbs have similarities to those of a Labrador. This crossbreed dog is strong and muscular with long legs, a long straight back, and a wide head. Also, it has floppy ears and round, light-colored eyes.

The breed cross between a Weimaraner and a Labrador results in an active and energetic dog that needs many hours of exercise and training to stay satisfied, healthy, and fit. They cannot be left indoors for a long time as they become destructive, trying to release all the energy they have accumulated.

It is important to note that these canines are very loving, friendly, and loyal to their human family members and owners. They are considered excellent pets since they get along very well with children.

The Weimaraner Lab Mix suffers from separation anxiety. That can be very negative for their health as they will feel sad and anxious if they are left alone for a long time. It is for that reason that they need to be together with their loved ones most of the time.

This breed can get along well with strangers and other animals, but the best thing to do is train it from a puppy so that it adapts better when it comes to socializing with them.

Keep in mind that your canine’s personality and behavior will depend largely on its parents’ dominant qualities and the education you give it.

As we have said, both breeds of dogs used for this mix have short coats. That means they don’t need much attention in this regard. The most advisable thing is to brush it once or twice a week.

It is important to note that unlike Weimaraners, Labradors can shed a lot, so your Weimaraner Lab Mix could inherit either one. Therefore, you must be prepared for these types of situations. In case your cross canine sheds frequently, you should brush its fur 4 or more times a week.

Similarly, it is only necessary to bathe this type of canine when necessary. You could do it once or twice every couple of months. However, if your dog has gotten dirty playing outside, then you should clean it up right away.

Another important aspect of your care is physical activity. These dogs were born to run, jump, play, exercise or do any physical activity throughout the day. We have to provide it with varied exercise routines that can accomplish between 1 and 2 hours a day.

It also needs a balanced diet that provides enough energy to perform physical activities. It should be based on high-quality foods that offer your Weimaraner Lab Mix with the necessary vitamins and nutrients.