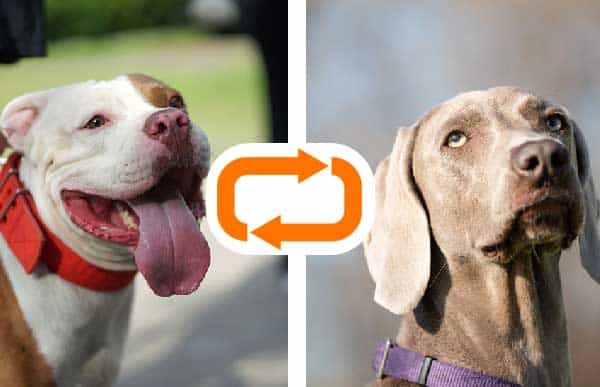 Many people love having pets in their homes regardless of their species. Some prefer dogs, while others like cats, snakes, rodents, or birds. The truth is that a pet is a companion with whom we can spend beautiful moments throughout the years.

As we all know, dogs are the most common pets in families. Many breeds stand out for their physical and emotional characteristics. However, in addition to the species that have existed throughout the centuries, there are others that have been created by breeders through the crossing.

These mixed breeds are noted for the dominant characteristics and qualities of their parents. Two of the most interesting and widespread species are the Weimaraner and the Pitbull.

The Weimaraner has a distinctive feature, and it is its beautiful silver-gray coat. That is the reason why this canine is known as the “Gray Ghost.” It not only stands out for its physical appearance but also for its qualities and abilities while hunting.

They are considered animals with a high level of physical activity, so they need to exercise every day. Like other dogs, the Weimaraner can suffer from loneliness, so it is essential that it is always accompanied.

The Pitbull dog is one of the most popular breeds today. Its most particular characteristic is that it does not have a specific behavior. The personality and character of this canine will depend on the education and training received from its owners.

That means it can be a friendly and loving dog, or it could develop aggressive behavior. Like any other dog, it can get along with people as long as it has received socialization training.

This breed of dog has been created through the mix between a Weimaraner and a Pitbull. Because of this, it received the name “Pittmaraner.” It is a rare and almost unknown breed, so you may not see it often. However, the result is a beautiful canine with interesting physical characteristics and abilities.

The first thing we have to highlight related to this mixed breed is its high physical activity level. Pittmaraners are very energetic, so they should be with people and families who have an active lifestyle.

The average size of a Weimaraner, taking into account both the male and the female, varies between 56 cm and 69 cm, while the weight can be between 23 kg and 32 kg. In the case of a Pitbull dog, it can measure between 40 cm and 56 cm and have a weight that varies between 14 kg and 30 kg.

The Pittmaraner has an average height between 53 cm and 55 cm and an approximate weight of 27 kg. Like most breeds, the male will be larger than the female. Likewise, the canine’s total growth will depend on several factors, such as the diet, care, and lifestyle provided by its owners.

This mixed breed’s physical appearance is unpredictable, so it will depend largely on its parents’ dominant characteristics. However, we can say that it tends to have an appearance similar to that of the Pitbull.

The head of a Pittmaraner is long and broad, its jaw is strong, its body is muscular but not disproportionate, and its chest is deep. It has floppy ears, and its eyes are clear. This canine coat is short and can be of various colors: white, black, gray, blue, reddish, chocolate, yellow, etc. In fact, it can also feature color combinations.

Both breeds used for this mix possess an enthusiastic and energetic personality. This canine loves to exercise daily together with its loved ones, so it is essential not to leave it confined at home for a long time.

They tend to be friendly and loving to their human family members and owners. They can also get along well with strangers and other animals. Still, it is important to exercise caution since, as we have said, a Pitbull’s behavior will depend on the education and training provided by their owners.

If a Pittmaraner brings out the characteristics of a Pitbull, then the possibility that it will develop aggressive behavior cannot be ruled out. It is important to emphasize that this will only happen in the case of poor education and quality of life.

Therefore, it is vital to provide it with socialization training from puppyhood so that it learns to get along with everyone around it and be a happy and friendly dog.

The Pittmaraner is a very rare breed, so its character and personality will be unpredictable.

One of the positive aspects of these dogs is the easy maintenance of their coat. The Pittmaraner is not a furry dog. That means that it does not shed much, so its brushing should only be carried out once a week and, depending on the case, twice.

These dogs do not need to be bathed very often. Once every 1 or 2 months will be enough. Now, if a Pittmaraner gets very dirty, then you will have no choice but to bathe it. It is also essential to clean the extra dirt.

This mixed breed needs many hours of exercise a week as it has a high level of physical activity. Make sure to create a varied exercise routine based on two hours of daily physical activity. They adore walks as well as running, jumping, playing, etc. The feeding of this canine is also important. It needs a balanced diet based on nutrients and vitamins to keep it strong and healthy.

It is essential to take a Pittmaraner to the vet. It will be enough to do it 1 or 2 times a year unless it has a disease since, in that case, the visits will have to be more frequent. The specialist will not only provide you with information about your dog’s health but can also change your canine’s diet and even take care of some hygiene aspects such as cutting its nails.