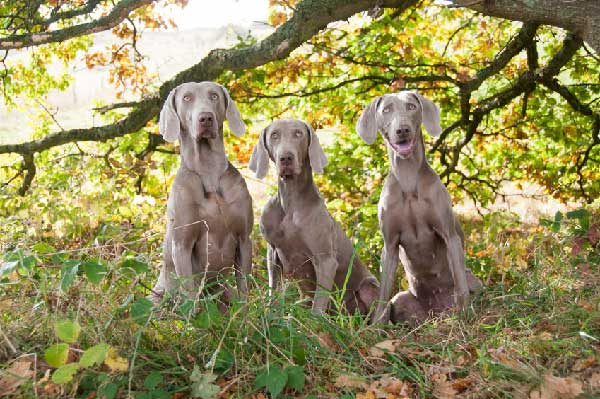 Dogs are incredible animals that are noted for their loyalty and great resemblance to humans in personality and behavior. There are many breeds of dogs, and each one has certain differences that make them unique. Some are characterized by their character, while others by their physical appearance and abilities.

Weimaraners are known canines in various countries of the world, and they stand out mainly for their high level of energy and their abilities during hunting. It has a particular physical appearance whose distinguishing feature is its beautiful silver-gray coat, which is why this canine is known as the “Gray Ghost.”

Like other breeds of dogs, such as the Vizsla, a Weimaraner presents a loving and friendly personality towards its owners and members of its human family. They can also get along well with strangers and other animals. Still, they need to receive socialization training from puppies since we remember that these canines have a natural hunting instinct.

Weimaraners can be similar to other dog breeds. However, they are mainly characterized by being excellent hunting canines. Now, one of the doubts that arise in most of the people who acquire a Weimaraner is about the first moment in which this dog goes into heat. That is why it is essential to know exactly when that situation will occur.

When Do Weimaraners Go into Heat?

Female Weimaraners tend to go into heat for the first time after one year of life, although this is only an average. Actually, the time range can vary between 8 months and 2 years of the canine’s life. You can also take as a reference the moment when your dog’s mother came into heat.

How is the Reproductive Cycle of the Weimaraner?

The number of times a female dog can go into heat per year will depend on its breed. In the case of the Weimaraner, it is proven that this type of canine goes into heat twice a year on average. Keep in mind that some may go into heat only once a year while others, 3 times.

Each reproductive cycle is made up of 4 periods where the entire process occurs:

It is the first period of the reproductive cycle, lasts 9 days. At that time, the female begins to attract males. We can detect this state by observing the swelling and also bloody discharge. It is advisable to keep the female away from the males so that no one gets hurt.

This period usually lasts between 2 and 21 days. During that time, the female Weimaraner is already sexually receptive to the male. The easiest way to realize that the canine is in this period is when the secretion decreases and it becomes larger and softer. It is important to supervise the dog during this stage to avoid any inconvenience.

The signs of estrogen stimulation decrease during this period. It occurs from the 14th day and can last between 60 and 90 days. We can realize this since it returns to its normal state and the bloody discharge decreases.

This phase refers to the rest of the sexual cycle, that is, the period that passes between the end of one heat and the beginning of the other. Generally, this period usually lasts between 4 and 6 months, depending on the female Weimaraner’s organism. This hormonal inactivity lasts until it goes back into a heat cycle.

Some Signs That May Indicate That Our Weimaraner is in Heat

As we have mentioned during the Weimaraner’s reproductive cycle phases, the most common sign is the swelling. Obviously, bleeding is a fairly common sign in these cases as well. Your Weimaraner may initially mark certain places in the house. That is why it is advisable to keep it away from any furniture or white wall for at least 2 weeks.

Also, remember that when an animal of this type is in heat, it is likely that it begins to act differently than it usually does. It is possible that your Weimaraner begins to present a more hyperactive personality than usual or is simply a little more rebellious. It can also become more loving and friendly than usual.

How Long Will a Weimaraner Bleed for?

Generally, the females of this breed usually bleed between 2 and 3 weeks. During that time, you will want to make sure to keep it in a comfortable place away from walls or furniture to avoid staining them.

It is normal for this canine to clean itself during this period. Some dogs of this type tend to remain calm during these moments, while others can be a little more active. All Weimaraners are different, so their personality will be unknown during that stage.

This process must be carried out after the start of the heat, specifically at 10 or 12 days. It is essential to take the female Weimaraner to a quiet place where we will introduce the male. At that time, both will court each other, sniffing and playing until it is time for the male to mount the female.

The most common is using a male Weimaraner, but if you want to mix, it will depend on you which breed you choose. Either way, this male is likely inexperienced in this matter, so it could mount the female Weimaraner in the wrong position. However, its instincts will allow you to do it correctly after a while.

If the female Weimaraner agrees to be mounted, then it will lift its tail to the side. The male will try to carry out the process until its done.

What Happens After the First Heat of a Weimaraner?

After a Weimaraner has had its first heat, it is likely that you will notice certain changes, especially in the size of its nipples, which will be larger than before. After a while, they will decrease a little in size but will remain a little larger than before (at least until it is sterilized).

The difference is that it will become smaller than when it was in heat. It should be noted that it will never return to its original size.

In some cases, a female Weimaraner may have pyometra. It is an infection in the uterus which fills with pus and could be fatal for the animal. This infection can occur 2 to 6 weeks after the first cycle. If, after the first heat of your Weimaraner, you notice that it is sick, do not hesitate for a second to take it to the vet.

A Weimaraner can also have a false pregnancy after the first heat. Generally, it usually occurs one or two months after the cycle. The female may begin to have swollen mammary glands and milk production. Simply put, such a dog exhibits symptoms of an actual pregnancy. This disorder can negatively affect the canine’s mind.