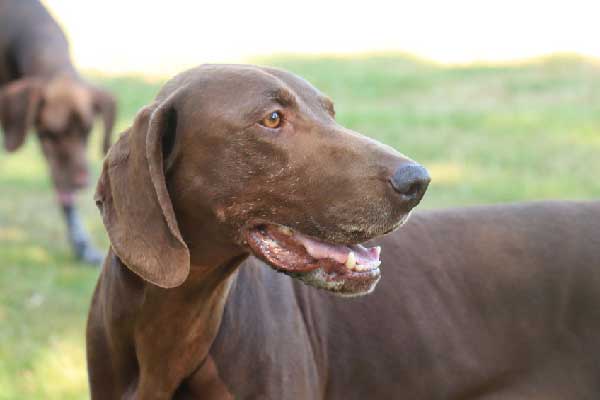 German Shorthaired dogs are intelligent and hyperactive animals. This type of canine loves to exercise and spend time with its owners.

It is an active dog that enjoys spending time outdoors. It likes to be in the water swimming for hours and on the land running for a long time.

The German Shorthaired is a wonderful family dog, as they have an affectionate and friendly personality for their humans that cannot be compared. That is why when people acquire a dog of this breed, they are happy.

One of the questions many owners ask is why their German Shorthaired dogs shake most of the time.

Why Does My German Shorthaired Dog Shake Very Frequently?

Usually, there can be many reasons why these animals tend to shake either inside or outside their homes. However, it is essential to know the main reason why these situations occur.

Why a German Shorthaired shake?

Dogs have a vital system very similar to that of human beings, and that is why when it is cold, their body begins to emit small electrical discharges in the muscles, which make them tremble.

The muscles’ movement during shakes produces heat that our dog takes advantage of to relieve the cold it feels.

It is important to remember that canines have a body temperature higher than that of human beings, and although they are covered with fur, they also suffer from cold, especially those dog breeds with little hair.

There are a lot of pathologies that can occur with some type of tremble in a German Shorthaired dog. The most common are:

German Shorthaired Shivering from the Cold

When lowering the environment’s temperature, it is very typical that your pet is observed shaking in its bed. Through this, the puppy looks for the best way to warm up to stop shivering, so it resorts to snuggling with its owner in search of comfort.

The reason is that these movements (tremors) are used in thermoregulation in order to increase the body temperature and soften the feeling of cold. Despite having their bodies covered in hair, they can also suffer from the cold.

A German Shorthaired dog, as its name implies, is a canine with short fur. Because of this, the cold can easily penetrate their skin, causing shivering in your pet.

A drop in sugar (glucose) can lead to a loss of balance and, in turn, generate shakes in your pet. We recommend that if your dog has this case, always have a little honey in your bag to give to the animal.

German Shorthaired Trembling Due to Stress, Fear, or Anxiety

It is very common to observe fear when your pet is exposed to something that makes it uncomfortable, such as fireworks or the consultation table with the veterinarian, despite the fact that the latter treats the animal with affection, care, and love. Sometimes, the doctor is forced to give the dog treats or kibbles to gain its trust and make it stop shaking.

It is considered a disease caused by a virus, which seriously affects puppies and adult dogs that have not been vaccinated.

This disease has many forms, and one of them is neurological, with a severe prognosis.

In this case, the tremors can be accompanied by tics, loss of balance, and discomfort. It should be noted that in the most serious cases, your pet can suffer from seizures. Before the neurological phase, other symptoms usually appear. Some of them are:

Some German Shorthaired canine owners freak out when they see their animals shaking in their sleep. Some of them move their limbs and may even bark.

It can usually mean that your pet just has a bad dream.

It is very typical that when dogs have gastroenteritis and pain in the abdomen area, they present some slight shakes. That is one of the tremors that scares dog owners since, although the cause is small, it usually comes without anyone expecting it and for no apparent reason.

Most of the time, they are because of something they have eaten and should not eat it. However, there are a lot of pathologies that can occur at the abdominal level accompanied by pain.

If your German Shorthaired presents slight tremors in any case, and at the same time, you notice it down, without wanting to move, eat, etc. It may be that its body temperature is high.

In this case, it is important that you go to the veterinarian to prescribe some medicine to eradicate the animal’s fever.

Shaking After a Large Amount of Exercise

That is very typical in animals (mainly German Shorthaired dogs) that do long mountain routes, races, etc., especially if they are not well trained. When remaining at rest, the muscles can present some involuntary shake due to the effort, but after a while, they relax.

Remember that a German Shorthaired is an athletic animal with a lot of energy, so if you see that it trembles after exercising, you don’t have to worry since it will calm down after a while.