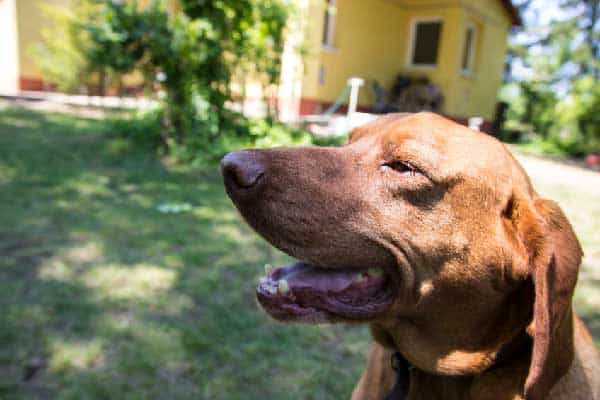 The Vizsla is an animal recognized worldwide for being loving and affectionate with people, especially with its loved ones. That is the reason why it is nicknamed the Velcro dog since it cannot be a second away from its owner.

Many Vizsla dog owners wonder why their pets tend to lick them frequently. Even most owners say that their canine Vizslas’ licks are like a sign of affection towards them.

Why Do Vizslas Lick So Much?

There are many reasons to determine why Vizslas tend to lick too much. Some of these reasons can be:

It is one of the most common reasons that dogs of this type lick their humans.

Just as puppies are licked with love and affection by their mothers, adult dogs want to do the same to you, so their licks could be considered as “kisses” to show you how much they love you.

Although licking is a sign of affection towards you as its owner, there may be a point where such displays of affection are excessive. If you want your Vizsla to stop licking you so often, just ignore it on occasion and walk into another room each time this behavior starts. Over time, the pet should understand that licking too much causes you to move away and prefer not to be next to it.

The grooming of animals is another common reason why dogs lick each other.

Like cats and other creatures, it is in a canine’s nature to groom itself by licking its fur.

One of the most common places for animals to lick is their paws. Even after a long walk with your Vizsla through the park or the beach, they often tend to lick their paws to remove dirt and anything else that they have stepped on during their walk.

However, you have to pay close attention to how much your Vizsla dog licks.

Moderate licking in the animal represents normal behavior, but excessive licking may be due to a minor medical problem. That is, if your Vizsla reaches a point where it licks too much, it is recommended that you take it to the vet. That is because when a dog begins obsessively licking its own body, it may be due to possible underlying health problems.

On a daily basis, dogs try to communicate with us in so many ways. There are times when owners do not realize this intention, but other owners fully understand what their canine Vizsla means.

One of the ways that dogs often communicate with people, especially their humans, is through licking.

Why Do They Do It?

Your Vizsla will likely need something when it licks too much. Actually, when a dog licks you, there are usually many reasons for it, such as:

It is essential to mention that you should pay attention to it when your pet communicates with you and do everything possible to understand it.

If you notice your Vizsla licking you intensely, look around to see if something is wrong. Perhaps it is because the water bowl from which it usually drinks is empty or because the dog door is closed, so it cannot go out to play or relieve itself. There can be many reasons.

There are several reasons why dogs lick themselves, certain objects, or people very frequently. Your Vizsla may be scared, anxious, nervous, bored, or in pain.

When these animals lick too much, they are most likely trying to reassure themselves. That is because licking various things can relieve stress for your pet in a healthy way. However, obsessive licking reinforces the anxiety and makes the problem worse.

Additionally, compulsive licking can be an indicator of underlying problems such as allergies, infections, or pain. There are many Vizsla canines that suffer from this type of situation, but with proper control and checkup, it is sure that it can be improved.

When you observe that your pet begins to lick immoderately, go to your veterinarian to check it. On the other hand, it is a good idea to contact an animal behavior specialist so that he can help identify and resolve your Vizsla’s anxiety.

Licking wounds is an intuitive nature of dogs with themselves and with their human owners. Dogs lick any wound that is painful or irritated, be it from cuts to scrapes.

But, many times, people wonder why their Vizslas tend to lick scabs from wounds. That is because dog saliva has antibacterial and antimicrobial properties that can help fight certain bacteria that damage the affected area.

When a canine licks itself, it helps remove dead tissue and clean dirt from its wounds.

These animals can not only lick their own wounds, but they also lick those of their owners. It is because dogs have an instinct to lick any damage, cut, and scrape they see. Vizslas can do this to clean the wound and help speed up the human’s healing process.

However, it is essential to remind you that if your canine licks too much, it is a sign of a health problem. The same happens when your pet licks your wounds. That is not bad because your Vizsla licks you with good intention, but it must be taken into account that the mouth of dogs contains bacteria and germs that can cause infections, making your wound even worse.