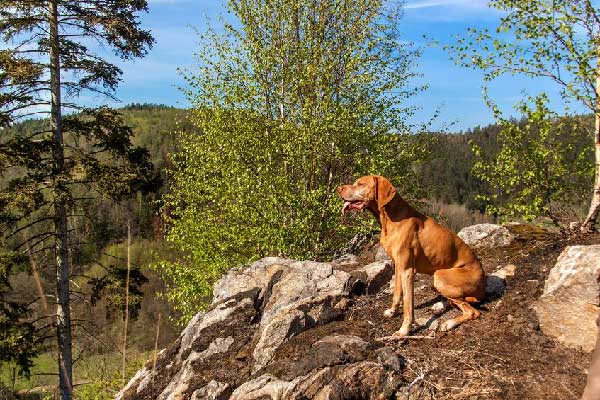 Dogs are the animals that we can commonly find in most people’s homes. Many families adopt this type of animal more frequently because they are considered excellent pets and also because they are the creatures most similar to human beings in terms of personality and temperament.

However, that is not the only reason why families acquire these animals. Many people need to have a certain breed of dog that carries out a specific activity. A clear example is the hunters. Generally, a hunter’s job is made much easier by having a canine companion by your side.

One of the best-known dogs and with the greatest hunting skills is the Vizsla. These animals are characterized mainly by being excellent companions of hunters and also by their high level of physical activity. They require a lot of exercise each day to be healthy and fit. They love to run, walk, jump, swim, play, and do any type of training with their owners.

These dogs should be treated with a lot of love because they have a sensitive personality. They can become sad and anxious if they are left alone for a long time. Vizslas get along well with most people, especially with their owners or members of their human family.

Having a hunted dog leads to knowing how it hunts as well as its training for it.

How Do Vizslas Hunt?

The first thing we need to know is that Vizslas are very athletic and intelligent dogs that display an instinct to protect their loved ones. In addition to that, they are highly skilled, love to be stimulated physically and mentally, and have a developed sense of smell. All of that makes these canines excellent hunting dogs.

This dog adapts to all types of hunting but specializes as a pointer for small game. Vizslas move perfectly in water, land, and swampy areas, so they are capable of hunting on any terrain.

One of the most distinctive aspects of this breed of dog is its golden-reddish coat. This animal uses this feature as an advantage when hunting as it allows it to camouflage itself in different types of terrain.

This canine can think of the most cunning way to hunt its prey thanks to its intelligence, developed sense of smell, and strong hunting instinct. Generally, this animal uses the environment around it to camouflage itself and walk slowly without making noise, waiting for the right moment to approach its prey.

Many hunters take advantage of this canine’s pointer ability as it allows them to know in which direction the prey is.

Besides adapting to any terrain, Vizslas can also adapt to any strategy to hunt pheasants, quail, or any other bird. On many occasions, this breed of dog is only used to search for prey. It is teamwork between the hunter and his canine companion.

While the hunter shoots the prey, the Vizsla is responsible for collecting it.

Despite the fact that this canine can be sensitive at certain times, they are able to withstand the noise of the gunshots without being scared.

How to Properly Train a Vizsla Dog for Hunting?

Before training a Vizsla, you have to know more about hunting the type of prey you want to catch. Remember that not all dogs of this type chase the same target. However, as we have said before, Vizslas can adapt to different kinds of hunts regardless of the terrain where the prey is located.

These canines specialize in small game hunting, especially hunting birds, although they can also catch rabbits and other small animals. Vizslas are highly intelligent and teachable dogs that love to learn and be trained.

However, they are also dogs that can get bored easily, so it is essential to provide them with varied and entertaining training. That way, they can show their full potential and improve quickly.

Obedience training is a fundamental point in these cases since it will not only facilitate your work but also allow it to better develop its hunting skills and techniques.

There are fun and effective ways to prepare your Vizsla for hunting:

Familiarizing the Smell of Our Vizsla with the Scent of Prey

The first thing we have to do is look for a prey previously hunted in order to familiarize your Vizsla with its smell and appearance. You can use the same species of the hunted animal several times and progressively change it so that your dog becomes familiar with the different types of prey that can be found in the field.

Afterward, drag the prey so that your Vizsla begins to chase it. That is useful because by doing this, we are allowing our dog to follow the trail of the prey, improving its sense of smell much more.

Once you do that, the dog is ready to find the prey in a place where you have hidden it. It is a good practice, especially if you train it on different types of terrain.

When doing this method outdoors, your dog will want to chase any small animal it sees. You can allow it to chase some as long as you have it on the leash. You can use positive reinforcement during this practice.

Getting Your Vizsla Used to Locating Prey

As we know, the Vizsla is a pointer dog capable of locating its prey by pointing at it with its muzzle. However, it is essential to keep in mind that although they present this characteristic, it must be trained to improve even more. As in the previous method, you can use prey, skin, or bottled scents to teach your canine to find the target through its scent.

The most efficient way to do this is by placing the prey on the ground and rewarding your Vizsla each time it is pointed at it.

The idea of this training is not to make your dog chase the prey but to point it. Later, you can increase the difficulty by carrying out this training in a place with more distractions and placing the target further away. Using the rewards in this training will speed up the Vizsla learning process.