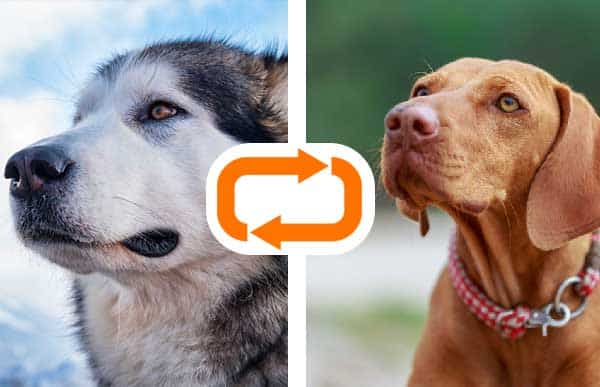 There is a great variety of dog breeds in the world. Each one presents different and similar characteristics that allow them to be compared with each other. It is for this reason that these animals are not only acquired as pets, but also each one can perform different activities according to their characteristics.

Now, it is essential to note that throughout history, many groups of breeders have experimented with different breeds of dogs to create canines with specific characteristics and abilities.

It is possible to mix almost any breed of dog in the world. For that reason, we will talk next about the cross between a Vizsla and a Husky. This mix results in a very friendly, curious, playful, and affectionate dog with most of the people around it.

The Vizsla belongs to a breed of dog that is characterized by having a high level of physical activity and requiring daily exercise. They are very active and energetic animals that can easily get bored.

They have been used over the years as hunting dogs thanks to their extraordinary abilities and excellent sense of smell. The personality of a Vizsla is affectionate, friendly but at the same time sensitive since they can feel sad and anxious if they are left alone for a long time.

The Husky is one of the oldest dog breeds in the world. It is a beautiful canine with an attractive appearance that resembles that of a wolf. This canine is known mainly for its beautiful coat which is recognizable by anyone in the world. In addition, it is also a desired animal for its affectionate and pleasant personality, which usually fits perfectly in any family.

The Vizsla Husky Mix is ​​the result of the mix between a Vizsla and a Husky. This interesting breed is characterized by having a high level of energy and physical activity that makes them very athletic animals.

It is not only characterized by being active but also by presenting a friendly and affectionate personality with its loved ones, especially its owners and members of its human family.

This mixed breed will mainly exhibit the dominant characteristics and qualities of its parents. However, the Vizsla Husky Mix may present different physical traits that can belong to either a Vizsla or a Husky. Everything will depend on which of the genetics of its parents has been dominant.

Generally, the care of both dogs (Vizsla and Husky) is similar since they can present similar characteristics, such as their level of physical activity, required food, etc. However, there are certain differences that may be reflected in the Vizsla Husky Mix, so care may vary depending on the dominant characteristics.

A cross between a Vizsla and a Husky will mainly highlight its physical appearance. It is important to note that both dogs used in this mix belong to medium-large breeds. Therefore, the Vizsla Husky Mix will have a similar size and weight.

The size of a Vizsla Husky Mix will depend on not only the dominant characteristics of its parents but also the diet, development, gender, age, and quality of life in general.

The Vizsla Husky Mix will have a strong, muscular, and well-proportioned body. Generally, the ears of a Husky are pointed and triangular, but this mixed breed most likely has large, floppy ears like the Vizsla.

The eyes of this canine will depend on the characteristics inherited from its parents. Therefore, they can vary between brown, amber, and sky blue.

The coat of a Vizsla Husky Mix will also depend on the dominant characteristics of its parents. It can have a thick fur like the Husky or a short, hard coat like the Vizsla. Huskies can have different coat colors, the most common being black and white. However, the Vizsla Husky Mix could present alterations showing a white with a brown coat.

The Vizsla Husky Mix is ​​considered an active and energetic dog that requires a high dose of daily exercise due to its high level of physical activity. They are playful, curious, loyal, affectionate and friendly canines with their owners and members of their human family.

However, if properly trained puppies, they can get along well with strangers and other animals, including dogs and cats. It is important to note that the Husky has more difficulties to socialize with strangers, so this characteristic can be reflected in the Vizsla Husky Mix.

Notably, this mixed breed dog can suffer from separation anxiety, just like a Vizsla. That is why it will need the company of its loved ones most of the time to avoid feeling sad which could affect its health.

As we have said, a Vizsla Husky Mix is ​​an athletic dog that needs to exercise daily (at least one or two hours a day). That is why, as the owner of such a dog, it is crucial to provide it with a varied exercise routine to avoid boredom. These physical activities can be walks, agility training, etc.

Depending on the inherited coat of this breed, it will need different maintenance. If it has a short coat, it will only need to be brushed a few times a week. On the other hand, if the Vizsla Husky Mix has thick fur, then its maintenance will have to be daily. Also, this canine should be bathed only when necessary. It is advisable to do it once a month.

Being a very active canine, it will need a balanced diet that allows it to stay healthy and full of energy. It is important to provide quality food in controlled portions to prevent it from gaining weight.