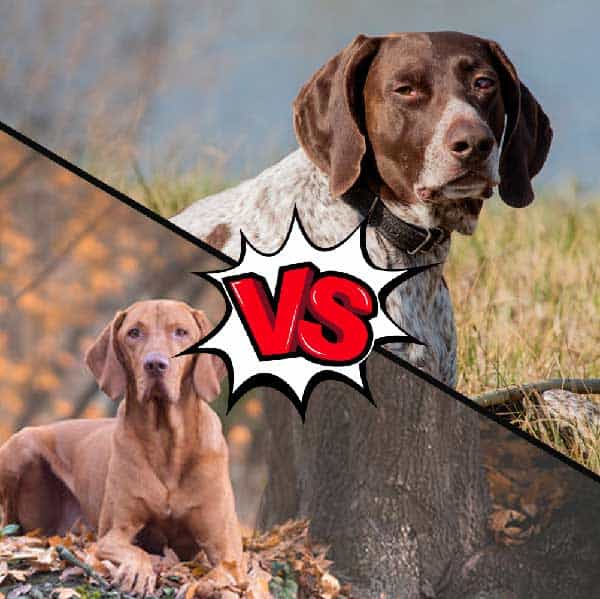 Although they are from different origins and are different in appearance, the Vizsla and Braque Francais are two purebreds with similar features.

Both have almost the same physical characteristics, except for the colors of their fur. They are low maintenance dogs that are easy to groom. Moreover, these dogs are both suitable for inexperienced owners and are ideal for those who have children.

So, which is the better dog to choose? In this Vizsla vs Braque Francais comparison article, we will analyze each dog and help you decide.

An intelligent and gentle pointing dog: the masters of the Braque Francais are full of praise for this sporty and methodical dog. Well known to French hunters for its great qualities as a hunting companion, it also makes a very good companion dog. It’s a rare pearl of the French cynology.

The history of the Braque Francais

In the 14th century, Gaston Phoebus described a breed of pointing dog which is the direct ancestor of the current Braque Francais. From the outset, it was selected in the southwest of France for its qualities as a pointer.

Over time, the breed split into two groups of different sizes: the Gascony type and the Pyrenees type. Outside of France, the French pointer is not very well known.

The different types of Braque Francais

The main difference between the two types of Braque Francais is the size. The Braque Gascony is larger than the Braque Pyrénées. This results in some slight differences in the shape of the head, but they are minimal. The character is essentially the same.

Regarding the fur, several types are often found in the two categories of Braque Francais: speckled white and brown. The dog can bear larger brown spots and tawny traces above the eyes and on the lips and limbs.

The characteristics of the Braque Francais

Noble and powerful, the Braque Francais has a robust and muscular physique. As with all Braques, the head is long without being heavy. It’s stretched over a neck almost without dewlap.

With a little marked stop, the muzzle is slightly shorter than the skull. It is flared and ends in a brown nose with open nostrils. Its frank, brown eyes give it an intelligent and observant look. The ears are supple, moderately long, and frame the face at eye level.

The back is broad and straight with an oblique croup and short, muscular loins. Seen from the front, the forechest is broad but appears long and tapered.

The behavior of the Braque Francais

It is often said that the Braque Francais is born trained. So, for those who need a home pet dog or for inexperienced hunters, this is the ideal dog. Very observant and intelligent, it has an instinct for adventures and adapts very well to all terrains.

In a family home, it is faithful, gentle, calm, affectionate, and very patient with children. Attentive to the slightest gestures of its masters, it is very easy to train. Obedient and sensitive, nothing borders it like disappointing its master.

The Braque Francais: who is it for?

The Braque Francais is a sports lover and tireless lover of nature. It’s for masters keen on wide-open spaces. It’s ready to spend long privileged moments exploring the woods and plains. Being around a loving family that is full of life, the Braque Francais asks no more to have happy days!

With its elegant appearance and tawny coat, the Vizsla, also known as the Hungarian Pointer, is a dog that will not leave you indifferent. Gentle and energetic, this ideal companion dog brings a lot of fun to any home. But let’s find out more about this breed of dog and its specificities.

The history of the Vizsla

Its name does not lie: the Hungarian Pointer is indeed a dog that comes from Hungary. While it is quite difficult to trace its family tree, it is believed to have originated from the cross between Turkish hunting dogs and Hungarian companion dogs.

The animal emerged from a cross, the first ancestors of which appeared in the 17th century. The Hungarian Pointer was originally a dog of the Hungarian nobility. It is widely used for hunting, especially in the plains or in the marshes.

The breed, as we know it, was not recognized until the 19th century. Today, the Hungarian Pointer is a very popular companion dog. It is still present in Hungary, but also in the rest of Europe as well as in the United States.

It sometimes retains its functions as a pointer and remains very effective in sniffing the scent of the blood of an injured game.

The different types of the Hungarian Pointer

You should know that there are two different breeds of Hungarian Pointer:

The coat of the Hungarian Pointer is systematically golden-wheat. The color also varies from fawn to sand.

The characteristics of the Hungarian Pointer

The Hungarian Pointer is a magnificent dog of medium size. It is an animal with light and athletic physique. It has a very strong tail at the start whose diameter gradually decreases.

The head of the Hungarian Pointer is often carried straight and gives it an air of nobility. The rather broad skull is marked by a rather short muzzle. The eyes, which are oval and often dark, exude a lot of intelligence and understanding.

The skull is framed by the dropping ears in the shape of V. It should be noted that the wire-haired Hungarian Pointer is a little more robust than its cousin. It is also characterized (you guessed it!) by wire hairs that are longer on the whole body.

The behavior of the Hungarian Pointer

The Vizsla can be a very good companion dog as well as an excellent pointer. It is docile, gentle, affectionate, and cheerful. It is an ideal dog with children, and in any family in general.

Very playful and energetic when needed, the Hungarian Pointer can remain very calm once back home. Some consider it to be too serious a dog, who always seems to be in the throes of meditation! However, it remains a very popular and easy to train dog.

The Hungarian Pointer: who is it for?

The Hungarian Pointer will fit into most family homes. If you devote some time to its training, it will turn out a lovable and loyal dog.

Like all pointers, the Hungarian Pointer is a sporty dog, which needs exercise. This is why it doesn’t enjoy 100% apartment living. You have time to take it out several times a day and make it let off steam.

When hunting, the Hungarian Pointer can also work in the plains and swampy terrain.

The Vizsla and the French Braque are two dogs with similar characteristics and character. Both are ideal for families with children and other pets. They are apartment and stranger friendly. Also, they only bark occasionally. However, the Vizsla is more commonly found than the French Braque. Hence, the latter is more expensive.

The Braque Francais is more ideal for chasing and catching prey while the Vizsla isn’t. So, as you can see, for apartment living, it wouldn’t matter which type you choose. However, the French Braque is more recommended if you need a dog for tough terrains and chasing games.