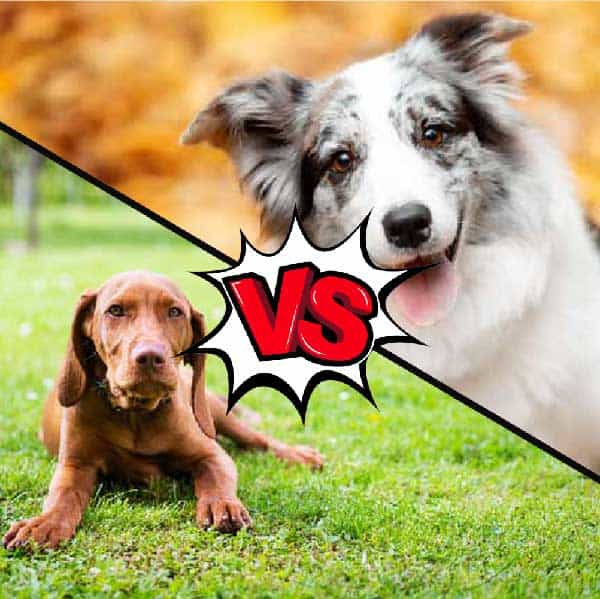 Most families around the world have a pet regardless of the species and breed. These animals become important in the lives of these people since they are considered as companions. On many occasions, people tend to love their pets more than a person.

The dog is one of the most popular animal species as a pet. These animals are known as man’s best friends because of the loyalty and affection they offer. Not all canines are the same. There are many breeds that have different abilities and physical characteristics. Two of them are the Vizsla and the Collie.

The Vizsla is one of the most popular pets among families, and they are characterized by two interesting aspects: their high level of physical activity and their personality. These canines are known to be athletic, energetic, and active and to exercise on a daily basis. Vizslas are loving and kind to members of their human family and other people, including strangers.

The Collie, also called Border Collie, is known as the most intelligent dog in the world. Their learning skills outperform those of other breeds. Like Vizslas, these canines create a strong bond with their owners and members of their human family. They are friendly and playful with adults and children. Collies need to spend most of their time with their owners as they cannot stand loneliness.

The Vizsla is an ancient breed of dogs that originated in the 10th century when the Magyar tribe invaded central Europe during the Dark Ages. These dogs precisely come from the Magyar tribe as they were used as hunting dogs for rabbits and waterfowl.

As the years passed, the Vizsla suffered several historical events being the most important after the First World War, where they were on the verge of extinction. Fortunately, they managed to survive to this day thanks to a group of lovers of these canines.

The Collie dog’s history dates back to the 18th century in the United Kingdom, specifically on the borders of England and Scotland. These canines were bred as sheepdogs to work with any type of herd.

Thanks to their learning abilities over the years, Collies began to be used for their agility and intelligence. Some use them as police dogs to detect any type of narcotic as well as for search and rescue missions. Other people still use them to work with livestock, although they are excellent pets for many families.

Vizsla dogs are medium-large in size and can reach their maximum development at 2 years of age, depending on their lifestyle. Generally, male Vizslas are between 56 cm and 66 cm in size, while females can measure between 51 cm and 61 cm. The weight of a male of this breed varies between 20 kg and 27 kg while that of a female between 18 kg and 25 kg.

These dogs are characterized by their beautiful, hard, and short, golden-rust colored fur. They have a muscular, slim, and well-proportioned body. The eyes of these dogs are brown or amber and match their coat perfectly. In addition, its skull is broad and domed, its muzzle is square, and its nose is wide with a reddish color.

The Collie is also considered a medium-large dog but is usually smaller than the Vizsla. The males of this breed have a height that varies between 48 cm and 56 cm, while the females between 46 cm and 53 cm.

A male Collie’s weight is between 14 kg and 20 kg, while females weigh between 12 kg and 19 kg. Like all breeds, this canine’s maximum size will depend on the diet and care provided by its owner.

Collies have a similar appearance to the Australian Shepherd dog, but their biggest difference is their long tail. The body of this dog is elongated, and its legs are muscular. This breed can have 3 types of ears: floppy, semi-drooping, or pricked ears.

Collie’s eyes are generally brown and blue, although each eye can sometimes have a different color (one blue and the other brown). The coat of this dog can be rough or smooth and short or long, and they can present different combined colors such as :

Vizsla vs Collie: Personality and Behavior

Vizslas are characterized by being affectionate and friendly with members of their human family, children, strangers, and other animals. They tend to have a sensitive personality that can be affected if their owner leaves them alone for a long time. When they feel lonely, they can become anxious, which could be bad for their health.

In addition, these dogs are known for their hunting skills and a high level of physical activity. They require daily exercise to be in shape and never get bored. They cannot stay in the house for a long time as they can become destructive.

Collie dogs are known for being active and energetic, so they are special for families with a dynamic lifestyle. They love to exercise, go for a walk, and do any mental stimulation exercise since they are very intelligent and teachable.

These canines are obedient and orderly, so they will not represent any problem for their owners. They can live in any area but are better adapted to life in the country.

Like Vizslas, Collies hate loneliness, so if they stay alone for a long time, they could adopt destructive behaviors. They have a protective instinct, especially when they notice that a member of their family (adult or child) is in danger.

A Vizsla dog’s estimated life expectancy varies between 12 and 15 years while that of a Collie between 10 and 14 years. It is important to note that either of the two breeds can live up to 20 years or more if their owners provide them with an excellent lifestyle through adequate care and good nutrition.