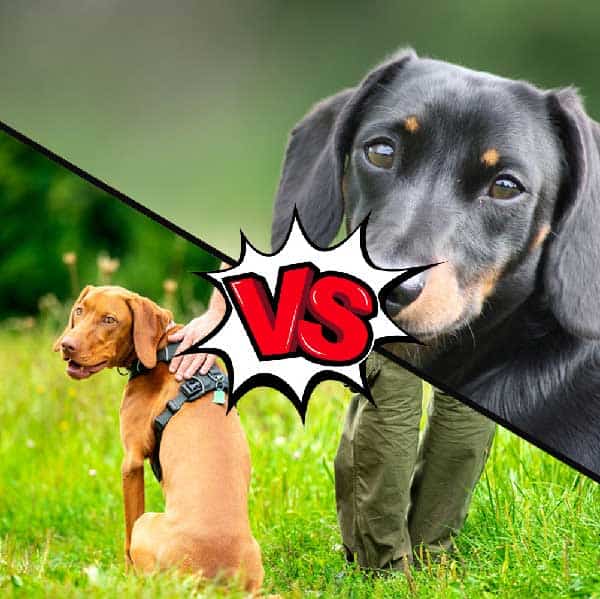 Pets are a fundamental part of the lives of many people around the world. Dogs, cats, birds, rodents, and snakes are just some of the most popular pets among families.

Generally, families choose an animal with specific characteristics that suit their lifestyle as this would greatly facilitate their care. That is one of the reasons why dogs are part of most families in the world. There are many breeds of canines with different physical and psychological characteristics. Two of the best known are the Vizsla and the Dachshund.

The Vizsla is a dog that stands out for its hunting skills and its high level of physical activity. They are intelligent, active and energetic canines that need to exercise and play every day to stay in shape. These animals tend to suffer from separation anxiety since due to their susceptible personality, they cannot tolerate being alone for a long time.

The Dachshund is characterized by being an excellent and loyal companion with its owners, children and other members of its human family. One of the most distinctive aspects of this dog is its small size and elongated body. They tend to suffer from Intervertebral disk disease (IVDD) more than any other breed due to their body shape. These canines are playful, friendly, and very brave.

The history of the Vizsla dog breed began in Hungary when the Magyar tribe attacked Central Europe during the Dark Ages. This tribe used these animals as hunting dogs. After a series of unfortunate events throughout history including World War I, this breed was on the verge of extinction. However, thanks to various groups that love these dogs, they managed to preserve the breed to this day.

The Dachshund originates from Germany. It is important to clarify the composition of the name of this animal, taking into account that “Dach” means badger while “hund” means dog. That name is due to the fact that the main function of this animal was to hunt badgers.

This canine originated centuries ago, and as the years passed, groups of fans of these dogs created 2 more types of this breed. Today, it is still used for hunting in Europe, but in North America, it is considered an excellent family pet.

These canines are characterized by having a short, hard, golden-oxide coat which stands out along with their brown (or amber) eyes and reddish nose. The body of a Vizsla is robust, muscular and slim. It features floppy ears, a short muzzle, and a wide head.

On the other hand, Dachshunds are characterized by having a small size and elongated body. Both the male and female of this breed have an average height that varies between 25 cm and 30 cm. In the same way, they have an average weight that is between 7 kg and 11 kg.

The Dachshund is known to be a dog with a long body. It can present a short, hard or long coat with a color that varies between different shades such as dark brown, black, and reddish.

The eyes of this canine are medium and oval, its muzzle is not very pointed, its head is elongated, and its chest is broad and deep. It has long and floppy ears that tend to stand out a lot due to the shape of its head. Also, it is essential to note that the legs of the Dachshund are short.

Vizsla vs Dachshund: Personality and Behavior

Vizslas are known for their hunting skills. They are dogs considered to be excellent companions for hunters who have a high level of physical activity. They need to run, jump, play, and exercise every day to not only stay entertained but also to be in shape.

When a Vizsla stays inside a house for a long time, it could become bored and therefore destructive as it will try to use all the energy it has accumulated.

One of the most interesting aspects of this breed of dog is its personality. They are affectionate, friendly, playful and loyal canines that get along well with their owners, members of their human family, strangers (in certain cases), and other animals. Vizslas hate loneliness so they should not be left alone for long periods as they can feel anxious and sad, which would be negative for their health.

The Dachshund is a playful, friendly, loyal, and courageous canine. Unlike Vizslas, these dogs tend to distrust strangers and other dogs, so it is important that they are trained from puppies to learn to socialize. It is important to note that the personality of these animals depends on the type of Dachshund since each one has slightly different characteristics.

In most cases, these dogs are difficult to train and can become stubborn. However, they tend to respond adequately to positive training, so that’s one of the solutions to preparing this breed. Dachshunds have a tendency to bark a lot and can be destructive both inside and outside the house. In fact, they can ruin a garden due to their intentions to dig excessively.

The amount of time that any dog ​​can live will depend on the care, food, and quality of life that their owners offer them. The life expectancy of the Vizsla dog is from 12 to 15 years while that of a Dachshund between 12 to 16 years. As we have said, this time can be higher or lower depending on the canine’s lifestyle.