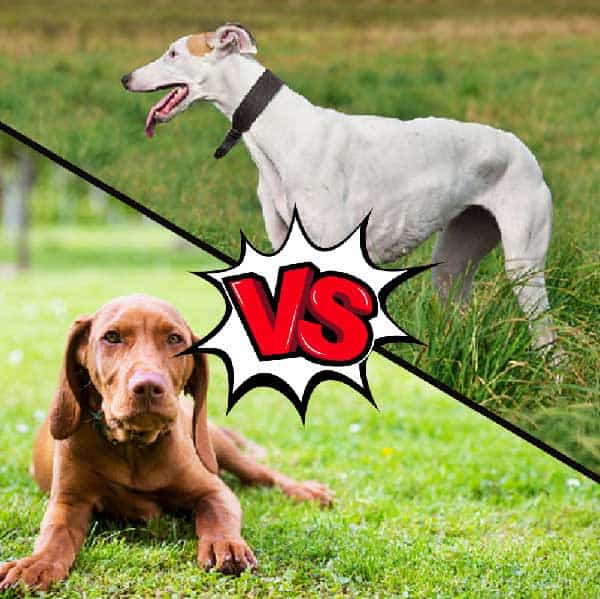 Dogs are considered the most popular pets among families in the world. Although many people have different types of pets, be they cats, birds, snakes, or rodents, dogs are known as the most loyal and affectionate.

We know that there is a wide variety of dog breeds spread across each continent, and each one has different characteristics that allow them to be differentiated from each other.

Some of them stand out for their physical appearance while others for their personality and behavior. Next, we will talk about two breeds that present not only interesting physical characteristics but also in terms of their character: The Vizsla and the Greyhound.

The Vizsla is a popular breed of dog characterized by excellent hunting skills. They are animals with a high level of physical activity and performance that need to exercise daily to stay healthy and fit.

They stand out for their sensitive personality. Despite being very active, loving, and friendly with the people around them, they tend to suffer from separation anxiety when left alone for long periods.

The Greyhound, like the Vizsla, is a very active and energetic dog that also requires daily exercise. In fact, these canines are known to be the fastest in the world, capable of reaching speeds of up to 40 miles per hour.

This breed is quite tender, sensitive, and affectionate towards members of its human family, especially children. Unlike the Vizslas, they need to be alone during certain times when they need it.

The Vizsla had its origin in Hungary. This canine fulfilled the role of hunter and companion of the Magyar warriors who invaded Central Europe during the Dark Ages. Later, this breed was adopted by Hungarian royalty.

After a series of historical events, including the First World War, the Vizsla was close to being extinct, but thanks to a group of fans, these dogs managed to survive until now. In 1960, the AKC (American Kennel Club) officially recognized this breed.

On the other hand, the Greyhound dog emerged in Great Britain. It is thought that the ancestors of this race came from Arabia and were transported to Great Britain in 900 A.D.

There are no accurate data about this breed’s history, but it is true that many of these canines were used for hunting large and small animals. Today, the Greyhound is used for dog racing due to its incredible speed.

The Vizsla belongs to the medium-large dog breeds. A male Vizsla size varies between 56 cm and 66 cm while that of a female between 51 cm and 61 cm. A male of this breed can weigh between 20 kg and 27 kg while a female between 18 kg and 25 kg.

The most characteristic physical trait of a Vizsla is its beautiful, short and hard golden-oxide fur, which matches the color of its eyes (brown or amber). This canine body is muscular, slim and well proportioned, presenting a broad head, a short muzzle, and a normal-sized, reddish nose. In addition, it has large, floppy ears that allow them to hear everything around them, especially when hunting.

The Greyhound is a large/giant breed of dog. In the case of males, they usually measure between 71 cm and 76 cm, while the females have a height that varies between 68 cm and 71 cm. The weight of a male of this breed is between 27 kg and 40 kg while that of a female between 26 kg and 34 kg.

This canine features a slender body with a deep chest, long back and legs, and an elongated, streamlined head. These features allow it to be the fastest dog in the world. The Greyhound’s eyes are oval and dark. This canine coat is short and fine and can present colors such as black, white, blue, red, sand, brindle, etc.

Vizsla vs Greyhound: Personality and Behavior

The Vizsla is a dog characterized by being active and energetic. These canines have a high level of physical activity, so they need to exercise every day to release all the energy they accumulate.

They love to do any physical activity together with their owners and members of their human family. Also, they are very playful with children. They can get bored easily, so it is not advisable to keep them indoors for a long time.

This breed has a loving and friendly personality with all the people and animals around it. However, on certain occasions, they need prior socialization training. They may suffer from separation anxiety as they hate loneliness and need to spend most of the time with their loved ones.

On the other hand, the Greyhound is a kind, cuddly, and sensitive canine that tends to get along well with every member of its human family, especially older children. However, it is essential to note that they are dogs that can sometimes be independent and reserved, so they need to have their own space.

The Greyhound can also get along with other dogs, but it is necessary that it has been trained to socialize. That is because they have a strong hunting instinct, so sometimes they cannot avoid chasing other animals. For that reason, they need socialization training from an early age to prevent it from triggering unwanted behaviors against other animals and even children.

Dogs can live for many years, even longer than they should. However, that will depend on various factors.

Generally, a Vizsla is a breed of dogs that can live between 12 and 15 years, although some can live for more than 20 years. In the case of a Greyhound, the life expectancy that it presents varies between 10 and 14 years. These are only average figures since their life span will really depend on the diet, care, and lifestyle provided by their owners.