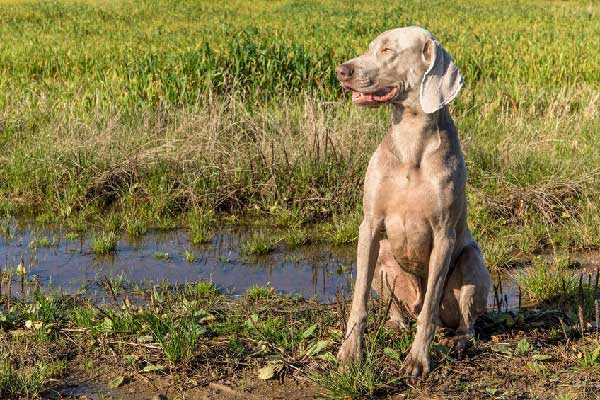 Most people choose to adopt or buy a pet. The presence of a pet in the home can change the quality of life and contribute to improving people’s physical and mental health.

That means that an animal of this type will provide us with the company we need all the time, preventing us from feeling alone as well as keeping us physically healthy by exercising with it.

As we know, not all pets are the same. Some families prefer to adopt dogs, which are the most common and popular, while others prefer cats, snakes, birds, rodents, etc. The dog is considered man’s best friend since it will always give us all the love and loyalty we need.

There is a wide variety of dog breeds that can differ from each other due to their own characteristics. All species have a distinctive attribute in their physical appearance, personality, behavior, etc.

One of the most interesting dog breeds is the Weimaraner. It is a very active, energetic, and versatile dog that exhibits a high level of physical activity and excellent hunting skills.

They need daily exercises, whether it be running, jumping, swimming, walking, playing, etc. If they do not receive training and are kept indoors for long periods, they are likely to develop destructive behaviors in order to release all the energy they have accumulated.

It is important to note that this canine is very friendly and affectionate with its owners or its human family members. However, they can also get along with strangers, children, and other animals as long as they receive socialization training from puppies.

It should be noted that this breed of dog suffers from separation anxiety, so it is not advisable to leave it alone for a long time.

All these characteristics and aspects of the Weimaraner are essential to take into account, especially when purchasing one. That’s because many people don’t properly research this breed of canine that they want to bring home. Because of this, many people wonder when a Weimaraner stops growing.

When Do Weimaraners Stop Growing?

We have to be clear that not all animals grow and mature during the same period. Each one has a different organism, and therefore, the speed of growth and development will not be the same. It must also be taken into account that there are certain factors that can influence these processes, either positively or negatively.

Generally, a Weimaraner dog matures between 1 and 2 years. The most common is that during the first year, it reaches full size, and during the second year, it develops its muscles and other aspects of its body.

A Weimaraner can reach its full size between 6 months and a year of age if we are more precise. It should be noted that the development of your Weimaraner between the first and second year of age will depend on the diet and exercise that you provide. These factors are essential in helping your pet grow.

Therefore, a Weimaraner stops growing when it has reached maturity and can vary between 1 and 2 years. Genetics can also play a role in how fast your Weimaraner grows. That is why it is normal for some dogs of this type to develop faster than others.

Size of a Weimaraner

We have already talked about the average time in which a Weimaraner will stop growing. However, many people buy this type of canine without knowing the maximum size and weight it can reach.

It is difficult to say exactly how big a dog of this type will be since there are many factors that influence it. However, there are average values ​​of the size that a Weimaraner will reach.

The Weimaraner is a medium-large breed of dog. The average size of this type of canine, taking into account both the male and the female, varies between 56 cm and 69 cm, while the weight can be between 23 kg and 40 kg.

Typically, a male Weimaraner can reach a height between 59 cm and 69 cm while a female between 56 cm and 65 cm. The weight of this canine varies between 30 kg and 40 kg in the case of a male, while the female can weigh between 25 kg and 35 kg.

It is vital that as the owner of a dog of this type, we know that the size will depend on certain factors such as diet, exercise routine, care, and lifestyle in general. As we mentioned in the previous point, the genetics of the canine can also influence.

That is why it is possible for a Weimaraner to be similar in size to its parents. That can also occur with other breeds of dogs.

How to Know if a Weimaraner Has Stopped Growing?

We have already said that each breed of dog develops differently. Some canines stop growing before others and vice versa. One of the most common and simple ways to know if your canine has stopped growing is to look at the size of its legs.

Generally, there is usually a disproportion between the sizes of the dog’s body with respect to its legs.

However, when its legs are sized to match that of its body, it indicates that the Weimaraner has reached its maximum growth.

Similarly, you can take your Weimaraner to the vet for a diagnosis about your dog’s development. In this case, through X-rays, we can tell if the canine’s growth plates have closed.

If you want to know the moment of development in which your Weimaraner is, the teeth can offer us some clues. As we know, a puppy’s first teeth begin to grow between 2 and 3 weeks of age.

Subsequently, these baby teeth will begin to fall out between 3 and 7 months of life to be later replaced by the permanent ones. That is of great help since we can know in what stage of growth our Weimaraner is.